I rang Ian Williams of Battles expecting a simple and definitely interesting interview, but unbeknownst to me the trees around my estate were scheduled to be cut down on that exact morning.  When he answered we got started, but in the background there was a constant grinding sound of saws gnawing on wood, feeding into my laptop’s microphone, and coming out of Ian’s speakers, into his microphone, and coming back through to mine, just a repulsive feedback loop, and this being an interview with the guitarist of Battles, it only seemed fitting, to have to overcome some sort of loop, all be it, ironic.

“Usually someone sets a loop, and then drums start blaring, and then we try to work out melodies or something like that, and then our neighbour will start pounding on our door because the loop is playing so loud, and they’re like ‘That loop is driving me crazy’. So that’s what we’re up against.”

Battles, are by no means a conventional sounding band, which makes their music very hard to pin down to any genre, with streams of progressive rock, jazz, electronic, and some sort of chemical X; a bit of sugar, spice and everything nice kind of sound.

When asked how that very specific sound came about, Ian’s reasoning was: “I think it involves the history of the musicians, of us and our pasts. My older bands were Don Caballero, and Storm & Stress, we always played our music, and we sort of brought those musical languages and sort of kept on our own little boundaries of how to make a sound.”

“It was sort of like putting one foot in front of the other and slowly we evolved from that.”

To achieve the colossal mishap of noise that Battles produce, a fair bit of technology is used, in the forms of laptop midi effects and various pedal assortments. Most of the technology used involves loops.

“We can send bass keyboard or guitars into loopers and increasingly those loopers can be pedals or they can be software. I enjoy Ableton live actually, and then from there you can go in so many directions, you can have different plugins for effects or you can have other pedals for effects. There’s a lot you can do.”

He gave me an account of how it was when they first started off creating this sound. 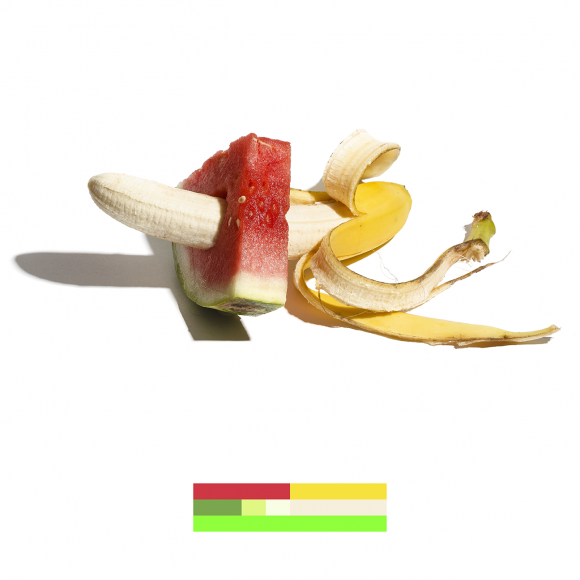 “It was a slow process. I mean when the band started out, this was like 2002, there was one laptop on stage, and there was 2 guys playing keyboard, both of us shared the same laptop. Out of the sound card, one keyboard was panned left, and then I was panned right. The left channel went to one amp and the right channel went to the other amp. It was a rincky dincky primitive, like really old school MacBook… We also had Echoplexes on stage. Those were the really good 90’s era pedals, and they would sync, they would give an audio pulse so you can lock them together.”

The band creates these loops which seamlessly interchange through a songs dynamic that doesn’t follow a conventional verse-chorus-verse-chorus structure. In regards to jamming, Ian stated that “it’s just sort of obvious, you can revolve the loop, I’m gonna take this loop and I’m gonna have it revolve, have version A, B, C in a sequencer or go for the other direction and say I’m just gonna have a complete rupture and you know, introduce something completely different. And it’s similar to DJing or something. Sometimes going in a totally different direction sounds good. And sometimes it’s sort of crappy, and it’s up to you to determine that.”

When it comes to song writing Ian explained that “you still need movement through the stuff, if you hear something for a little while you’d be like ‘Ok, I get it, I need something else’, so you still sort of have to face that. So I guess for the verse chorus verse chorus sort of thing you need a sense of familiarity, so you’re ‘oh I know this, I’ve settled into the song’, you also need freshness. It’s still the same balance issue you’d have whether it’s a pop song or whatever.”

At this point, the wood cutting outside was becoming a problem, I couldn’t make sense of anything that Ian was saying, and it was being recorded that way, because the trees right in front of my window were being cut. My option was limited to the bathroom, which I’m ashamed to say I considered, but then I figured that if I walked out of the bathroom with my laptop, my parents would assume that I have a serious technology addiction (not that I don’t). Luckily I found a spot. A small tight space between my bed and a dusty bookshelf… dusty from lack of use. So there I was snug in the tight space with an old violin, my sister’s guitar, and a small amp poking into my back. But at least the interview went on….

In 2010 Battles lost one of their members, Tyondai Braxton. In relation to this, I asked Ian how it was continuing on as a 3 piece in regards to live renditions of the older material.

“I think an earlier idea was taking loops, you know a loop can be, if you use the word voice in a larger sense there would be like three or four voices within one loop and you can sort of unpack that and you take the voices apart, and you’d have the multiple musicians play those voices, and that was sort of the more original starting points for the band. I think the unpacking of something like a loop and having one keyboard play this and one keyboard playing the response and a guitar sitting in the middle, letting that relationship and that balance, because music is always about finding a sense of balance, letting that balance play out amongst people on stage. It’s just about recalibrating a balance among three people, but I think you can infinitely play among the variables and make it five people or six or two or one, whatever. With technology you can reinsert things inside of loops or whatever you want to do.”­­­­­

With a quirky naming convention prevalent through Battles latest album, La Di Da Di, such as the song ‘The Yabba’, or even the album title itself, I questioned Ian on this naming convention.

“The Yabba is a reference to an Australian movie about Australia called ‘Wake in fright’, it was a good movie. The La Di Da Di, it’s… you know. I suppose it might have some reference to ‘La Di Da Di we like to party’, but it’s also just generic words for singing like Doh Re Mi Fa So La Ti, and we faced the issue of making an instrumental record with no lyrics and then what words do you apply to describe music with no singing. So we sort of throughout the sort of generic singing thing.”

With regards to the band’s progress through albums, Ian remarked that “you’re always in some ways putting yourself in a slightly new situation in order to sort of not have it just be this kind of repetition, repeating what you already know how to do, cause I feel it’s a bit dishonest if you’re like “Ya, I know how to do this, and I’m just gonna churn that out again”, cause it ends up feeling less inspired on the artists part I think. So you try to put yourself in the situation where you try to figure out to do something in a new situation.”