With every season that comes and goes, we witness the rebirth of trends from many different decades and eras. There is a feeling that fashion of the 1960s will never really become “out-dated,” as it showed, with regards to all other decades from the 20th century, the most class, individuality and authenticity. The selection from AW 16/17, in particular, has incorporated the fashion of the 1960s to a huge degree. Here are 5 trends from that decade that I just can’t get enough of… 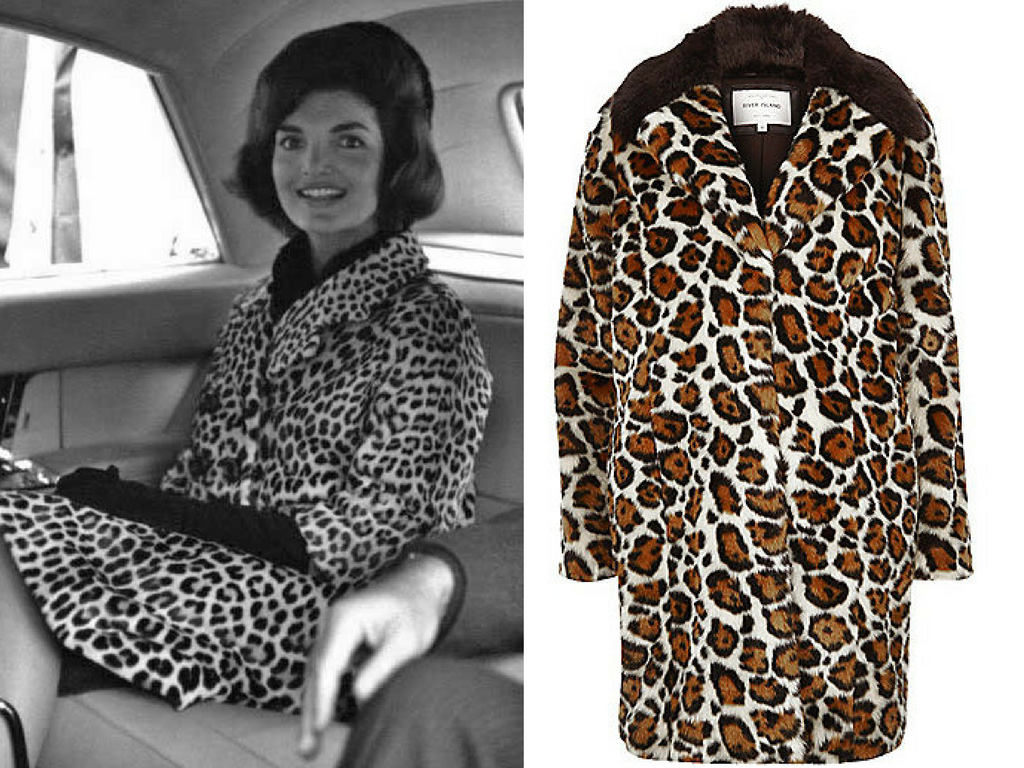 The leopard fur craze took off in the early 1960s, with Jackie Kennedy, the decade’s major fashion icon, styling it to sheer perfection. There will always be something very luxurious and chic about this trend, the First Lady pairing the bold print with an otherwise subtle, understated attire. Of course, during the 1960s, there was far less emphasis on the conservation and protection of animals than there is today. Thankfully, as the trend reintroduces itself into this year’s AW 16/17 collections, it does so in the form of faux fur only. The stunning piece pictured here is from River Island’s current collection and is 100% free of animal cruelty. 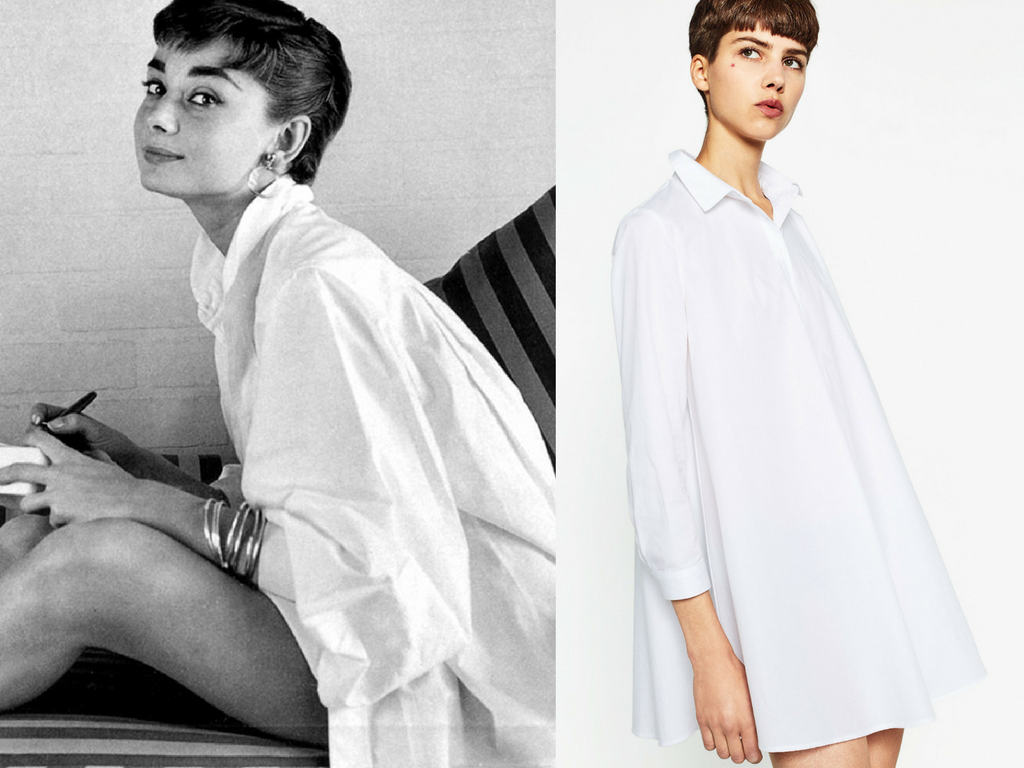 Although it could be said that the beautiful Audrey was responsible for setting many trends that are still adored today, the crisp white shirt is a personal favourite for many women today. The trend was first made popular in her debut film Roman Holiday. The white buttoned down shirt paired with a full skirt and belt was an original concept showcasing a new, feminine spin on what was otherwise classed as a man’s shirt. She later styled it with simple cigarette trousers for a more casual look,  and it could be said that she looked most beautiful of all when she simply rocked the shirt alone, oversized, giving the perfect balance between gracious and sexy. The Poplin shirt dress from Zara as shown above is both structured and feminine, a perfect take on Hepburn’s original trend. 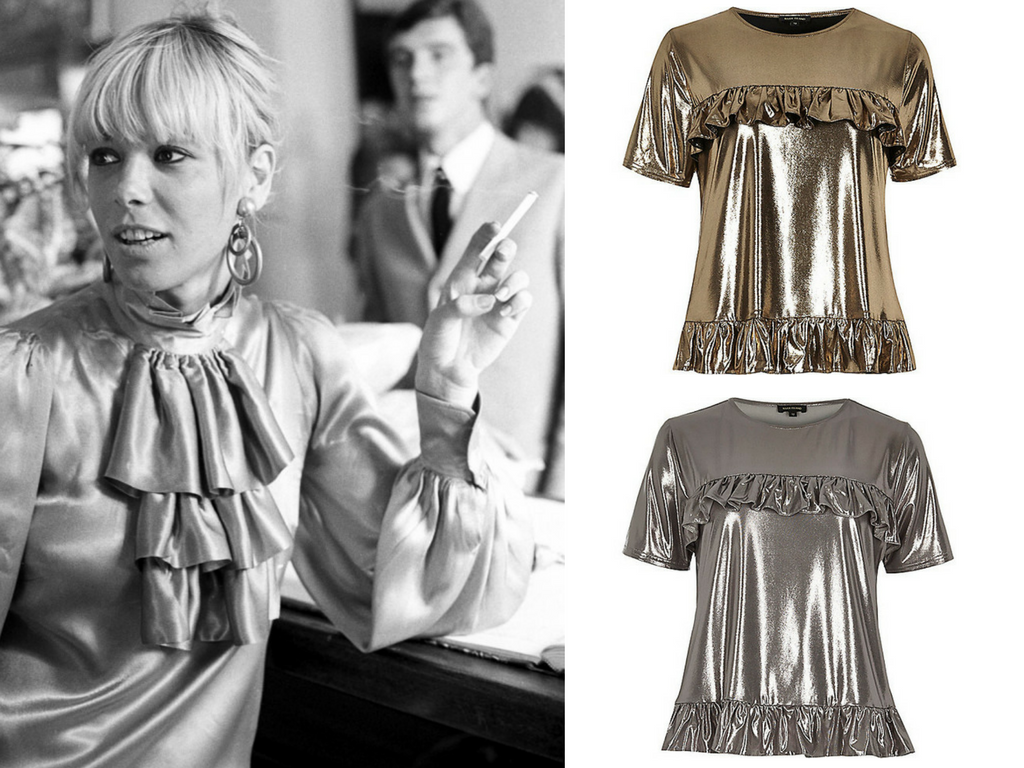 Ruffles and frills are everywhere this season, featuring in everything from high street casual wear to the most luxurious designer gowns. During the 60’s, actress, fashion designer and rock n’ roll muse Anita Pallenberg was known for donning this trend on many occasions. While her take on this particular style was generally quite an edgy, grunge approach, the frills and ruffles of this season’s collections have a much more glamorous feel to them. You can get the look for yourself with these gorgeous metallic tops from River Island, which come in both gold and silver. 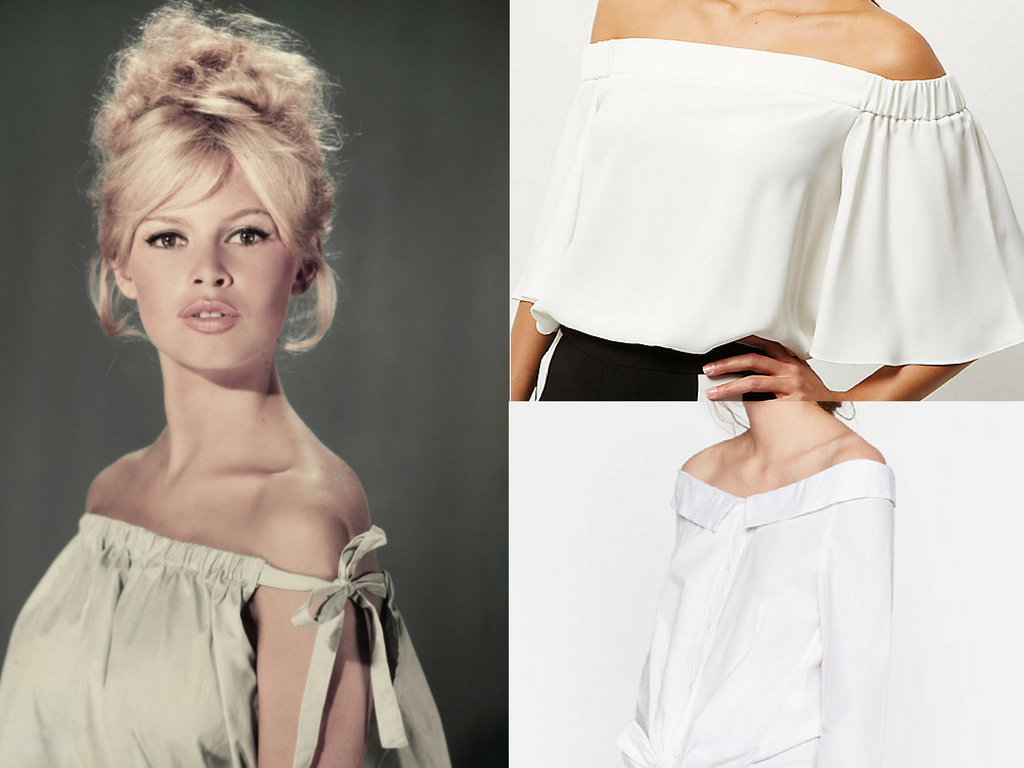 The Bardot trend has been increasingly popular over the last few season’s, staying firmly present in almost every brand’s AW 16 collection. Brigitte Bardot was of course the icon behind this timeless style, which reveals the perfect amount of skin while still remaining classy and versatile enough for every season. The trend basically consists of bare shoulders, while the sleeves can take on a variety of styles. Shown above is a loose, flowy sleeve contrasted with a more structured, collared style. 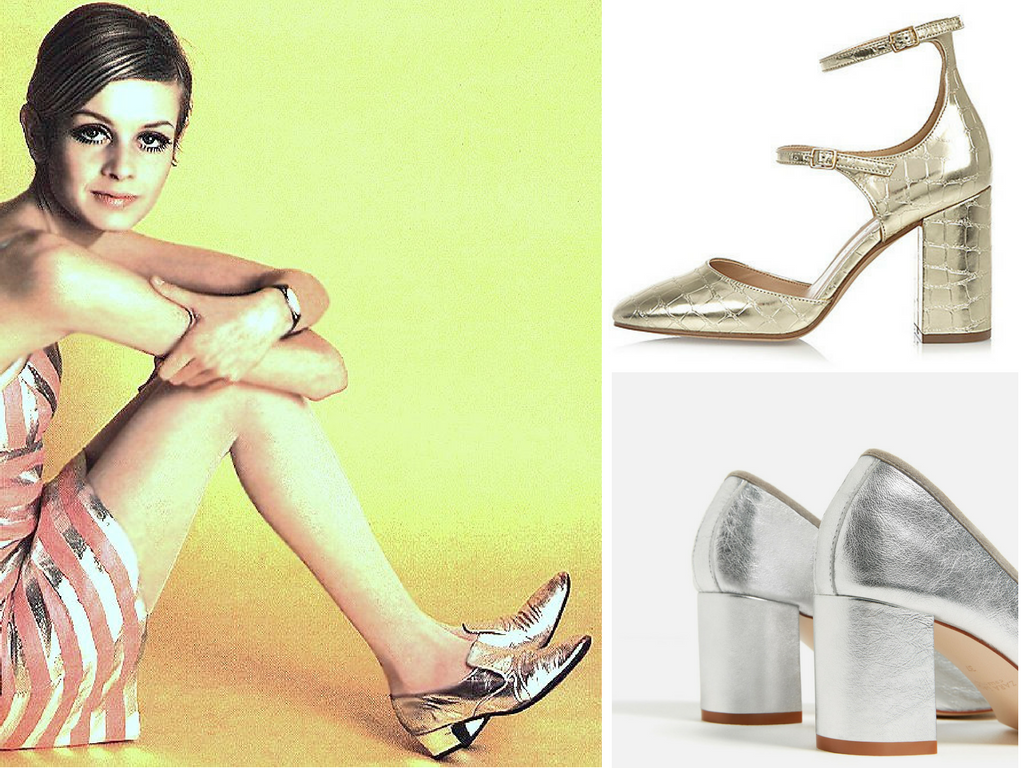 Whenever ‘60s footwear is thought about, an instant visualisation is the block heel. Twiggy, considered by many as the face of the UK Mod era, was seldom seen without a pair, and her favourites appear to have been anything metallic. Everyone from Carvela and Steve Madden to RI and Penneys are all over this trend for autumn/winter. The block heel is a favourite of many, as there’s no doubt that they are ten times more comfortable in comparison with stilettos and versatile for wearing from daywear to nighttime.