Méabh Lonergan speaks with members of the #UKStuckInPeru group on the lockdown, repatriation, and governmental progress.

The global Covid-19 outbreak has spiked measures of varying degrees in different governments across the globe – with friction being seen in places.  One such example is the 500 UK and Irish citizens stranded in Peru, a country under an extreme 15 day lockdown, and the UK and Irish response to this.  They include not only tourists of all ages, but also social workers, educators, environmental conservation experts and medical professionals. While the situation is fast changing – between the receival of a press release on Saturday 21st and the writing on Sunday 22nd the Irish government had agreed to charter a British Airways plane to repatriate Irish citizens – those left in Peru feel “abandoned” by their respective governments.

On March 17th, a decree was issued by Martín Vizcarra, the President of Peru, directing the General Directorate of Civil Aviation of their Ministry of Transportation and Communications to facilitate the repatriation of foreigners to their home countries, and Peruvians abroad to Peru, specifically exonerating them from the ‘closed borders’ measure under the State of Emergency.  However, the UK Government (and until recently, the Irish one) had made no moves to collaborate with the Peruvian government with this, with many of their citizens stranded in remote locations with no way to get to any major cities. “My personal situation is comfortable,” says Sarah Baxter, one of the UK citizens stranded.  She is staying with a British family living there, and has “ample food and toilet paper!”. University of East Anglia student Lauren Flello similarly counts herself lucky.  In internship accomodation with American students, she is grateful for her access to food and water. However, both women acknowledge the difficulties faced by themselves and others. “We’re permitted to go to the shops for food but otherwise we must stay indoors, and there is an 8pm to 5am curfew,” Baxter tells, and “there is talk that the situation could become more fractious, with stricter enforcement of the lockdown”.  Curfew is enforced by armed troops and police on the streets, and residents are allowed out only to visit the bank and to buy essential food and medical supplies. Flello mentions stories from other UK and Irish citizens of the military and police raiding hostels, and rumours of military aggression towards foreigners. “I consider myself so lucky to be in the accommodation I am in… this is not the situation of most of the 500+ Brits and Irish here!”  Marcus Edgar, a third UK citizen, describes the situation in Huanchaco, Northern Peru as “life as normal”, with markets, shops and pharmacies remaining open, friendly police patrols, and “no signs of the awful ‘panic buying’ scenes in Europe.” He praises the community spirit he has felt in face of the crisis.

Both Flello and Baxter are so far disappointed in the UK government’s attempts to bring them home, although Flello is grateful for the support her home university has given.  “They’ve been wonderful at keeping in touch with me, sending any info they feel may be helpful to me here and trying to help out with insurance information. They’ve really gone above and beyond… not just the Study Abroad dept but my Spanish lecturers, academic advisors and the insurance team.”  (When approached by Motley for a statement, the University’s study abroad team stated “the student is currently safe and well and we have been communicating with them on a regular basis to provide any support we can.”) On the UK government, she says “I do wish the British embassy was being more effective in their communication though, we all feel very abandoned and let down by them”.  While Baxter believes that the UK government and embassy are “working hard”, she also voices that she “would love to see confirmation of rescue flights in conjunction with guaranteed travel to Lima for all those Brits stuck outside the capital… getting a date for our return is what I’m most keen to hear.” At time of writing, UK Foreign Secretary, Dominic Raab had stated he had secured a return flight for “early next week”, and Tánaiste Coveney had announced the Irish government’s chartering of a British Airlines plane to repatriate Irish citizens.  Flello regarded the Irish government’s move as a success, saying “even if success comes in bits and pieces, and some of us don’t get out as quickly as others, it’s still a huge achievement.” Baxter spoke similarly, stating “to hear the news that Dominic Raab and the Irish government were committing to repatriation flights was extremely heartening”.  However, she is aware of the challenges that will be faced: the British and Irish nationals are spread across at least 15 locations in the state, and how to get them together, while the country remains in lockdown, remains a mystery to those stranded.

Flello emphasised the impacts this lockdown and crisis may have on mental health.  “There is widespread wariness/fear of the military and police as their actions have been somewhat unpredictable, and of course separation from family and friends in this stressful period is really hard on people,” she says.  Having suffered from anxiety and depression in the past, she is feeling the effects due to the uncertainty and lack of information, even if she has improved in recent years. She feels mental health is “overlooked” in crises like this, and sees that there are many of the 500 stranded who are struggling. Note: at time of writing (23rd of March) the author had reached out to the UK Foreign & Commonwealth Office with no reply.  Attempts were made to contact Irish citizens stranded in Peru, but none were reached. Prior to Tánaiste Coveney’s announcement, the Irish Department for Foreign Affairs and Trade gave a statement expressing that works with the EU and UK to repatriate Irish citizens were in progress. 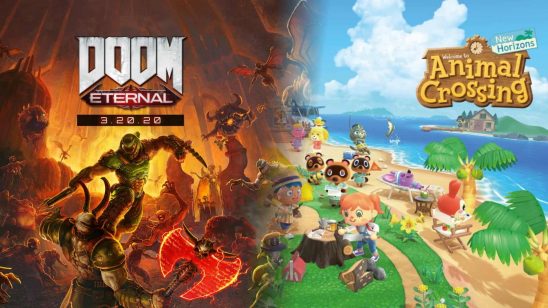 Animal Crossing Vs. Doom: The Ying and Yang of Gaming