Hassan Baker meets with Graham De Barra, director of Help Not Harm, and Chill Welfare’s Katy Macleod to discuss drug policy ahead of the 2016 General Election.

There seems to be a lot of confusion as to what the difference between the decriminalisation and legalisation of drugs. There also seems to be rarely any mention of harm reduction, and the media rarely seems to clarify.

Decriminalisation means that possession and consumption of drugs is not a legal offence, whereas sales, distribution or manufacturing remains illegal. This would be regarded as treating drug use as a public health matter rather than a criminal justice issue, because clearly the ‘just say no’ approach has never worked.

Harm reduction is a collection of strategies and techniques used to reduce the negative effects of drug use, making sure those who choose to use, use as safely as possible.

The conversation surrounding this is one of the most relevant discussions being had ahead of 2016’s General Elections. Help Not Harm is a campaign looking to decriminalise all drug possession in Ireland. 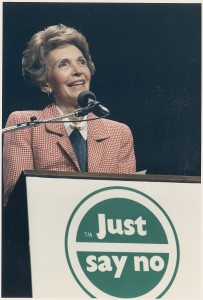 Speaking on this matter, de Barra said: “As a minimum, policy should increment changes such as decriminalisation. It’s the first step, really, of a lot of steps that need to happen. The reason it’s the first step is that it’s oftentimes a barrier to treatment and health initiatives including drug testing facilities or medically supervised injecting centres, these can be pushed out using other avenues such as licences from the department of health, and we definitely welcome that as well. If that’s possible without decriminalisation then fair enough, but oftentimes the way it is now, the law is in the way for these initiatives to enact.”

Decriminalisation would be a big step for the Irish government, but they are currently only toeing towards it with a lot of support for medically supervised injecting centres.

“The major benefits of drug consumption rooms is that it contains the paraphernalia that’s released into the hands of people who use drugs, it’s contained because people give it back before they leave. That means that there’s, at least by theory, none that are going back into the population”, Graham argues.

Help Not Harm has had a part to play in this, by spreading the discussion to the people.

“The focus is on canvassing. We launched these new election posters, bright and colourful, gets the attention of the public, and raises the simple messages, ‘patient or prisoner’, ‘treat or ignore’, ‘hospital or jail’. These are the questions that we think represent the values that we represent, and this is the core message at the end of the day for decriminalisation. We should be treating it as a health issue, not a criminal issue.”

Currently,  most vocal supporter of the medically supervised injecting centres seems to be Aodhan O’Riordan of Labour, but there are many more, which is not surprising as the statistics all show positive results.

“There has been no fatalities in any of these centres all over the world .There have been overdoses in these places, and what they’re able to do is administer naloxone, which gives someone 20 minutes, enough time for the ambulance to get to the hospital to be treated, and for the effects to be reversed. It’s also cost effective, for example, in Sydney there was an 80% reduction in ambulance call outs in the area where there’s a drug consumption room.”

Another harm reduction strategy that Help Not Harm is lobbying for is drug testing facilities. There are two means to go about doing this. One is mobile, while the other is centralised, both have pros and cons, mostly regarding funds. Graham’s insight on this is: “it’s not one or the other. I think really a hybrid model of having both is probably ideal, whether one is more cost savings than the other, I suppose the mobile because they’re going to be smaller machines.”

A mobile testing facility would consist of a spectrometer costing around €50, 000, along with costs for staff and training, but would be easier to locate into strategic areas. However a centralised centre would yield much more accurate results as Graham explains: “a lab will have, like in Josie Smith’s, in Public Health Wales, will have 5 machines. They have a spectrometer and they have 4 other devices that will detect different contents and different contaminations or the purity of the drug.”

The reason why intensive testing would be beneficial as it would yield much more data that researchers can extract harm reduction strategies from. Currently most drug testing is being done after an emergency or fatality as we saw the nBome 25i overdose a couple of weeks ago.

“We are a festival and event welfare provider in events across the UK and Ireland. We do things like chill out spaces, crisis intervention for people that are having problems at a festival, and a little prevention work and harm reduction work.” – Katy Macleod

Katy Macleod explained that there are rarely any cases of drug related fatality with somewhat responsible use. “For me, when we look at drug related fatalities its seems that it’s pretty much  that it never happens  that its somebody using a very small amount of a drug and having a bad reaction, it’s generally about what they’ve used it with, how much they’ve taken, or if they’ve taken a lot too quickly.”

Her experience with harm reduction is mainly based around nightclubs and festivals, both of which have their own difficulties, as some nightclub owners and festival organisers would frown upon having any form of harm reduction present as it would bring attention to drug use and would not be beneficial to the club or festival in the legal sense, which is also an argument of Graham’s as to why decriminalisation is the first step.

Macleod’s main advice for harm reduction is “just us a small amount and don’t take too much, so maybe wait an hour or two  before you re-dose, you can always take more, but you can’t take less. And probably try not to mix too many drugs together at the one time, think about alcohol as a drug, and just think about your environment, your mind set and things like that. People just really need to look out for each other, so if your friends experience any problems make sure that they get support, so if it’s a festival, go to a welfare tent rather than think ‘oh, they’ll come around.”

Macleod also back the drug testing argument as a means towards harm reduction; “There’s no way to visually tell how good quality your drugs are if they’re not forensically analysed. I’ve had a bit of experience working with other projects that offer it in Europe and it certainly does seem to reduce drug related fatalities at events and side effects and things like that, and other ways to do it are also to put forensic testing facilities in drug services as well and encourage people to utilise drug services to go and get they’re drugs tested and then they can also engage with an experienced drug worker that can give them some harm reduction advice.”

Regarding the differences between nightlife drug use and festival drug use, Katy’s opinion is as follows, “It’s similar. I suppose what can happen at festivals, because people tend to plan for a festival it’s kind of like a big blow out. It maybe makes people slightly more reckless than they would if they were just maybe clubbing for one night. I suppose because festivals are long stay it could be over like four or five days, it means often people aren’t really taking care of themselves, they may be not sleeping well, they may be not eating 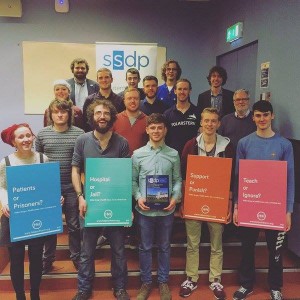 particularly well, they’re out in the sun for a very long time so they’re more likely to experience some the more negative side effects.”

She pointed out an interesting statistic, which is not obvious at all:

“The national prevalence statistics suggests that drug use amongst young people is actually reducing, which probably isn’t the perception you would get if you read the media, so there’s a sense that drug use is already reducing and you know maybe people are chasing to do other things, so really it’s about people having their right to make informed choices. But I think some of the trends for drug use is that we have an aging population of drug users so people are living longer because there are more harm reduction strategies.” This is surprising from a student’s point of view, for most students, college is the first, and maybe the only time they will ever experience or be in a drug related setting. But this just goes to show how much perspective we all actually have when it comes to these matters.