As ‘A Week in My Wardrobe enters its fourth iteration, I wanted to stray slightly from novelty and enter more into the realm of personal style, while also asking the bigger sociological questions. It led me to study my wardrobe – what’s really in there and how is it relevant to the column? I landed on a play on gender roles.

I own quite a number of women’s clothes so I thought I’d throw them on for the week… something I’ve done throughout the year already.

(A note to the reader: I’m no saviour – a man wearing women’s clothes isn’t a revolutionary concept, nor is it to the intent of this column to proclaim it thus. In 2020, it’s not news. In fact, it harks back to the ideas I outlined in the first column: that nobody truly cares about another’s outfit choices.)

For the recent autumn/winter 2020 menswear shows, the mood was unanimous, men’s fashion is undergoing a seismic shift. At Gucci, there was a complete abandonment of preconceived notions of contemporary masculinity. You needn’t look any further than the baby doll dresses and short shorts, the glam rock metallic trousers,

Meanwhile, on the red carpet, actors from Harry Styles to Billy Porter are branching out of the strict black tuxedo dress code in favour of the feminine. The same can be said for rappers like A$AP Rocky and Kanye West, notable admirers and wearers of women’s clothes. With confidence, there is nothing that can hold you back. This rang especially true with Billy Porter’s dress to the Oscars last year was part-tuxedo, part-ballgown – it was a thrilling proposition.

While I didn’t arrive at the campus in a ballgown and full beat, it was abundantly clear as I arrived at college on Monday 13, January, in high-waisted navy trousers from the vintage section of Topshop and a plain tee that nobody was likely to notice that I was wearing women’s clothes. It was the same on Tuesday as I wore my favourite Eckhaus Latta unisex jeans – though those are more eye-catching with their painted seams. Wednesday and Thursday came and I sported a pair of ‘Dad’ jeans from Topshop. Again, high-waisted, blue and straight-edged. It would be too hard to spot the difference in a quick glance. The only giveaway was the high waist.

Yet, while we can look around and see our classmates who typically shop from the women’s section wearing boyfriends’ hoodies and their dad’s shirts or jackets, we’re less likely to see men in

There are a number of reasons for this one. Firstly, sizing. Some men won’t be able to squeeze into sizes. Secondly, more damagingly, fragile masculinity prevents even a consideration of wearing women’s clothes.

As the Gucci show notes read, ‘toxic masculinity, in fact, nourishes abuse, violence, and sexism. And not only that. It condemns men themselves to conform to an imposed phallocratic virility in order to be socially accepted. In other words, toxic masculinity produces oppressors and victims at the same time.’

Again, to refer to my earlier point: I am no saviour for showing up in women’s clothes. Especially when there was no high heels or makeup involved – though that would’ve been fun, time didn’t permit and I don’t know the apparatus – it was just another outfit which is the point of this instalment of ‘WIMW.’

Why not broaden your horizons and browse the women’s section with the same intent of the men’s. High-waisted jeans are flattering and a more muscular man would find it hard to refuse a tight-fit top. Challenge yourself, clothes are fun so why not have fun with them. Men’s or women’s, who cares! 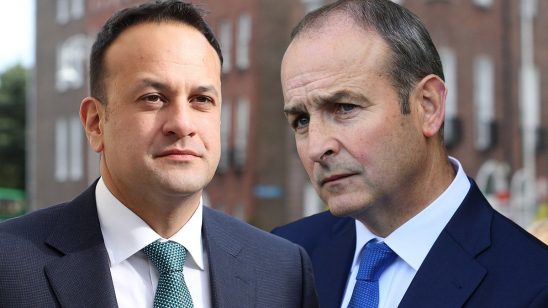 GE2020: We already know who will be Taoiseach, here’s why.