Killian Down gives an account of his gruelling experience in Berlin, a brief stop on a summer backpacking tour of Europe.

I did, I warned them. Taking a nine-hour night bus from Krakow to Berlin would be a mistake; a sleepless, neck-cricking error that we would pay for the next day. Yet, there I found myself, a victim of the frankly overrated system of the democratic vote, stuck in a space that a sardine would decry as a violation of its rights.

Leaning against the window pane in search of sleep, jarring vibrations buzzed along the glass and jangled through my head. I shifted uncomfortably in the musty seat and placed my forehead against the cool plastic backing of the seat in front of me, my folded arms tucked tightly against my chest, parcel-like. Opening one eye I glanced down at the zig-zag, helter-skelter pattern of the seat visible between my legs, the frantic design another reminder that sleep would not come easy.

Morning came skin-pinchingly slowly. The excruciating cycle of moving my head from the headrest to the window pane to the seat in front of me continued until the sun torpidly raised its head above the horizon and shed groggy light on the early morning streets of Berlin. I felt sand-papered from head to toe, having gotten no more than 45 minutes of sleep. Knowing that our trip to the German capital would be a fleeting one night stay, I resigned myself to a half-hearted, bleary-eyed visit.

I desperately hoped the Bradenburg Gate would open to reveal a Bradenburg bed; prayed that Charlie wouldn’t deny me a quick kip at his checkpoint.

Then, the hostel. Consistent in its dire reviews, it had caught our eyes and wallets with a ten euro-a-night price tag, a tag not found dangling from any other Berlin hostel. Upon arrival, we could understand precisely why; if the polished city-centre hostels were mink furs, the hostel that stood before us was a tattered anorak in a discount bin.
Grey and cold as Dickensian gruel, the garish building stood five or six storeys high. Groups of scruffy men loitered lethargically around the entrance, a cloud of cigarette smoke forming a hazy ceiling above them.

“A room for five, please,” and a darting run to the stairs.

It seemed some residents had deemed the fabric lining the stairs to be an interactive fresco – globs of gloopy purple jam lay half-trodden on the floor. Other additions were an unidentifiable brown, clinging anonymously to the carpet.

Unlocking the dormitory door, only two beds were free. A ‘clerical error’ the manager assured us, hurriedly shifting clothes and tobacco pouches to the floor to free up unmade beds. Sharing a trepidatious sideways glance, my four friends and I each climbed atop a bunk, using our backpacks as pillows to dissuade the itching fingers of would-be Fagins. 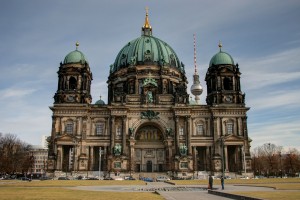 Minutes passed before two teenagers entered the room. Eschewing niceties, they warned us in stern tones to keep our belongings close for the night. Only the previous morning their friend had been robbed of nine-hundred euro by a fellow guest in this, our room. In the style of the skulking Scooby-Doo character later to be revealed as the villain, the taller of the two advised us to ‘leave while you still can.’

Gripping my backpack, I asked about the shower facilities. Gone they said, stripped from the walls to be sold for parts by one of the hostel’s more entrepreneurial guests. Leaving the room, one pointed to the wall next to my head. “What a grot-hole,”scrawled in black marker.

“Five tickets to Amsterdam, please” and a darting run to the train.