Here at Motley HQ we take our role as the bringers of up-to-date media coverage to the UCC body very seriously. Therefore when the British Fashion Council asked if we wanted our name to be printed on a card and waiting for us at the front door of Brewer Street Car Park, well.. we said yes. 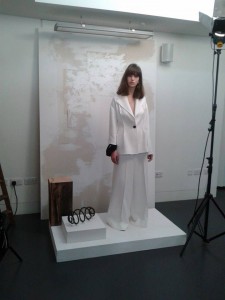 LFW’s main exhibition site in Soho, a magnet for budding photographers eager to see a Rosie Huntington Whiteley or a Daisy Lowe emerge from behind the air tight security and railings, in the past week housed numerous up and coming and under the radar designer collections. Included in this list were Faustine Steinmetz, a designer making use of the playfulness and versatility of textures, Molly Goddard, which presented us with rumpled stitching patterns and Ryan Lo, who as Wonderland perfectly puts it, is for the cherry print lover, the satin enthusiast, “the oriental princess, who is part 90s teen, at a Victorian tea-party.”

Located at the back of the second floor stood a Maybelline pop-up room, ready to tackle any sleep deprivation issues to have interfered with the complexion from the LFW aesthetic o 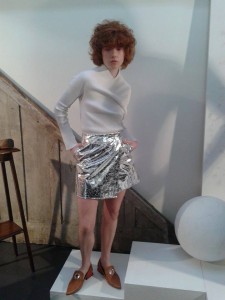 The second stop led me to the Conde Nast School of Fashion. By all means the UCC for London’s daughters of Vogue, as a student with bleached hair and a wry smile crossed my name off a list, I knew this was a place where fashion was at its purest and understood in all its forms and morals. I was there for the Rejina Pyo presentation. This was an exclusive and an experience unlike any other. While press members scurried around with phones and long lensed Nikons, the models struck their finest pose before rotating in collection ensembles, designed for the “strong, characterful woman who transcends time place.” 3D pattern cutting, minimalist shaping against bright tones make for a fashion gathering with an essence of a surreal reality, one brimming with functionality and originality. There were reoccurring injections of cobalt blue and foiled silver, strategic styles alongside feminine whimsical pieces. Some models played up to the quirkiness of the collection, mirroring oddly placed peep holes and alternating sleeve lengths with improvised folk dance to the soulful acoustics of Philip Diep. Makeup, as was hair, was naturally undone with a pop of bright pink across the eyes adding the couture edge.

Outside Somerset House, you were greeted by a plague with a sentiment that would prove to echo the values and hopes for the mentioned campaign; “Utopia – 2016, the year of imagination and possibility.” Inside lay Fashion Utopias, the international fashion showcase. To be discovered in the West Wing Galleries, the exhibition was divided into several rooms, each one dedicated to a country with its own stylistic interpretations of fashion design. An extremely impressive display, Indonesia – a representation of the four elements with a “desire for a creative cosmopolitan future” set nicely against Lebanon’s calling on architectural blue prints and light beams, a “re-imagining of a familiar space.” The Egyptian interval appealed to the Bohemian dresser with warm, muted browns and delicate drapery – an earthly goddess nod to femininity. A visitor couldn’t miss the endless cloud of paper lotus flowers strung from the ceiling. Speaking to the collection’s representative, I was informed of the significance of the symbolism of nature for Egypt’s designers, of the lotus evoking a rebirth, and as I told, it stands as a powerful metaphor for the Egyptian fashion industry’s movement against suppression.

London Fashion Week AW16 was an amazing experience for Motley Magazine to have had the opportunity to be involved in. For further coverage and insight on one of the year’s most celebrated industry events, visit Motley.ie.