Just days after submitting the final draft of her second novel to the publishers, Eimear McBride spoke to Laura Hussey about the success of her debut novel, her unique writing style and why the second book has blood on the pages.

Although it took the better part of a decade to get her first novel, A Girl is a Half-formed Thing published, Eimear McBride never did consider changing her experimental first novel.
“I always thought that the book was right even if it was deemed to be unpublishable. But I certainly lost hope that it would be published and after about five years I put it in the drawer and started to work on the second novel, so it certainly wasn’t the case that I believed all along that it would work out, I didn’t at all.’
The linguistic courage and stream of consciousness style in A Girl is a Half-formed Thing indicates a refined skill in manipulating language. McBride admits: “I never completed any work before I had finished Girl, I had done a lot of writing over quite a few years. I had always been working towards the idea of a novel but I never had actually sat down and written anything that I thought would have been a novel. Previous to that had more been about teaching myself how to write, learning the discipline. I was experimenting with language, definitely but I don’t think anything that I had written up until that point had been quite so focused. It was really only in writing Girl that everything came together and I understood what I was doing. And I think that just made everything much sharper.”

The process of composing such as experimental and successful novel seemed to emerge spontaneously, once the voice of ‘Girl’ was found.
“Well, when I sat down to write the book I had a very different idea in mind so I really wasn’t expecting to write the book that I did, but I did have an idea about the style, the kind of writing that I wanted to achieve in it and I knew I wanted to give the reader a different kind of reading experience to make them feel very close to the character so I knew the language would have to work in a different way in order to achieve that. When I sat down, I was certainly experimenting with language but working away towards this other idea which I couldn’t get to work at all. After a couple of weeks, I suddenly hit on the first words of A Girl and at that point, I understood that the novel was going to be something very different. And from that point on it was all about trying to follow my instincts and go where the language took me.”

The composition of the novel was done in three drafts across 6 months but McBride claims that the essence of the novel was really all there in the first draft.
“Certainly all the structure was and the following two drafts were really only about tidying the language up. So I think the fact that I had to write it in such a short space of time kind of adds to the sense of urgency of the book but it wasn’t something that I worked in consciously I think it just sort of occurred naturally.” 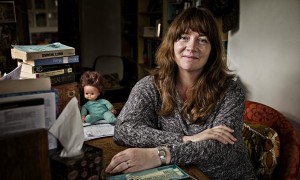 McBride has also recently been included in the much anticipated anthology of Irish women’s writing The Long Gaze Back, compiled by Sinead Gleeson (2015). The Long Gaze Back is a compilation of thirty short stories by some of the most gifted Irish women writers. It was interesting to hear how it felt for such a new writer as McBride to have her story included among such greats as Elizabeth Bowen and Anne Enright. McBride seems flattered by the experience.
“When Sinead asked me it was quite a long time ago, it was about two years ago, so the book still wasn’t particularly, I mean it had been getting some good reviews and I think maybe it had won the Goldsmith at that point but it hadn’t become the thing it became afterwards and so it was really flattering to be asked. I knew she liked the book, she reviewed the book and she’d interviewed me but she took a leap of faith on me and it was a really nice thing to be asked to be part of.”

Once again, quality and not quantity defines McBride’s experience with short story writing, having explained that “the first short story I ever wrote was for the Dubliners 100 book last year.”
In terms of her peers, McBride cites a number of contemporary writers whose work inspires and intrigues her, including Cork natives Kevin Barry and Sara Baume.
“There are so many Irish writers it’s impossible to say. I love Kevin Barry’s writing I think he’s a really fantastic writer and I love his linguistic courage. Equally I love Anne Enright for the courageous way that she writes about women. Sarah Bowens book Spill Simmer Falter Wither was a really great first novel. There are lots of writers I love in lots of different ways. And of course George Buckley was a huge influence on me right from the start.”

2016 will prove to be another great year for Irish literature with McBride announcing that she has just finished her second novel and hoping that all going well it will be published in the next year. After the critical acclaim of her debut novel, the second novel brings with it a host of expectations and McBride explained the differences between writing the first and the second novel. In comparison to A Girl, McBride found the writing process very difficult. “They’re not joking when they say the second novel is the difficult novel! It’s taken me the best part of eight years to write it, as opposed to six months for A Girl. So there’s a lot more blood and guts on the page.”

McBride’s second novel is expected to be released mid-2016.