“Eoin McSweeney speaks to the star of the summer about his new album, Simon Cowell and where it all began.”

“Time slows down in a situation like that, the adrenaline kicks in, and your heart is in your mouth. I felt sick. I felt completely overwhelmed and emotional. I wanted to jump up and down on the spot.” Not many of us have experienced a moment that changed our lives forever. Calum Scott, a down to earth and shy young man from Hull, has had that moment.

Calum, formerly a recruitment officer, decided to audition for Britain’s Got Talent with his sister. The show is watched by nearly ten million people, so he was understandably nervous. It didn’t help that his sister went out before him and was unceremoniously rejected by the judging panel, which included the infamous Simon Cowell.

He chose to sing a ballad cover of Swedish artist Robyn’s electropop song ‘Dancing on my Own’, his distinct voice ringing out over the Lowry Theatre in Manchester. The audience was silent as his haunting and emotive sound swept them and the judges away. Everyone watching would have taken in a short gasp of breath as he swept into the chorus with power and pace, taking control of the song and his future.

His performance was met with a standing ovation from everyone in the theatre. He received a thumbs up and a beaming smile from his sister offstage and Calum was visibly emotional. Then came his defining moment. Simon leaned over the other judges and pressed down on the Golden Buzzer in the middle of the table, signalling that he thought Calum was a special talent worthy of a place in the live shows.

“The golden buzzer was one of the best moments of my life, just because of that feeling of euphoria. And especially Simon Cowell, who pressed it and sent me straight through to the live shows – that meant they believed in me. For someone like Simon to say something like that about me just meant the world to me. It gave me a huge confidence boost and it made me believe in myself. It was amazing.” That was the moment that changed Calum Scott’s life.

A soft laugh and apology for the bad signal greets me when I ring Calum. Immediately the 27 year old comes across as someone who has been thrust into the limelight, but is ready to seize his opportunity. His strong Hull accent is prevalent when he explains to me that he’s in London doing a few sessions for his new album. He certainly hasn’t let the fame go to his head, joking that his friends hear more from him now that he’s on the radio and TV than they ever did before his audition.

Calum wowed the audience of Britain’s Got Talent again in the live shows and since he came sixth in the 2015 Grand Final, his single ‘Dancing on my Own’ has skyrocketed in the UK and Irish charts. It peaked at number 2 on the UK singles charts in August, having sold over 400,000 copies and it has been hard to escape the Tiësto remix or Calum’s original cover on Irish radio this summer. His audition has nearly 80 million views on YouTube while the single has over 15 million. 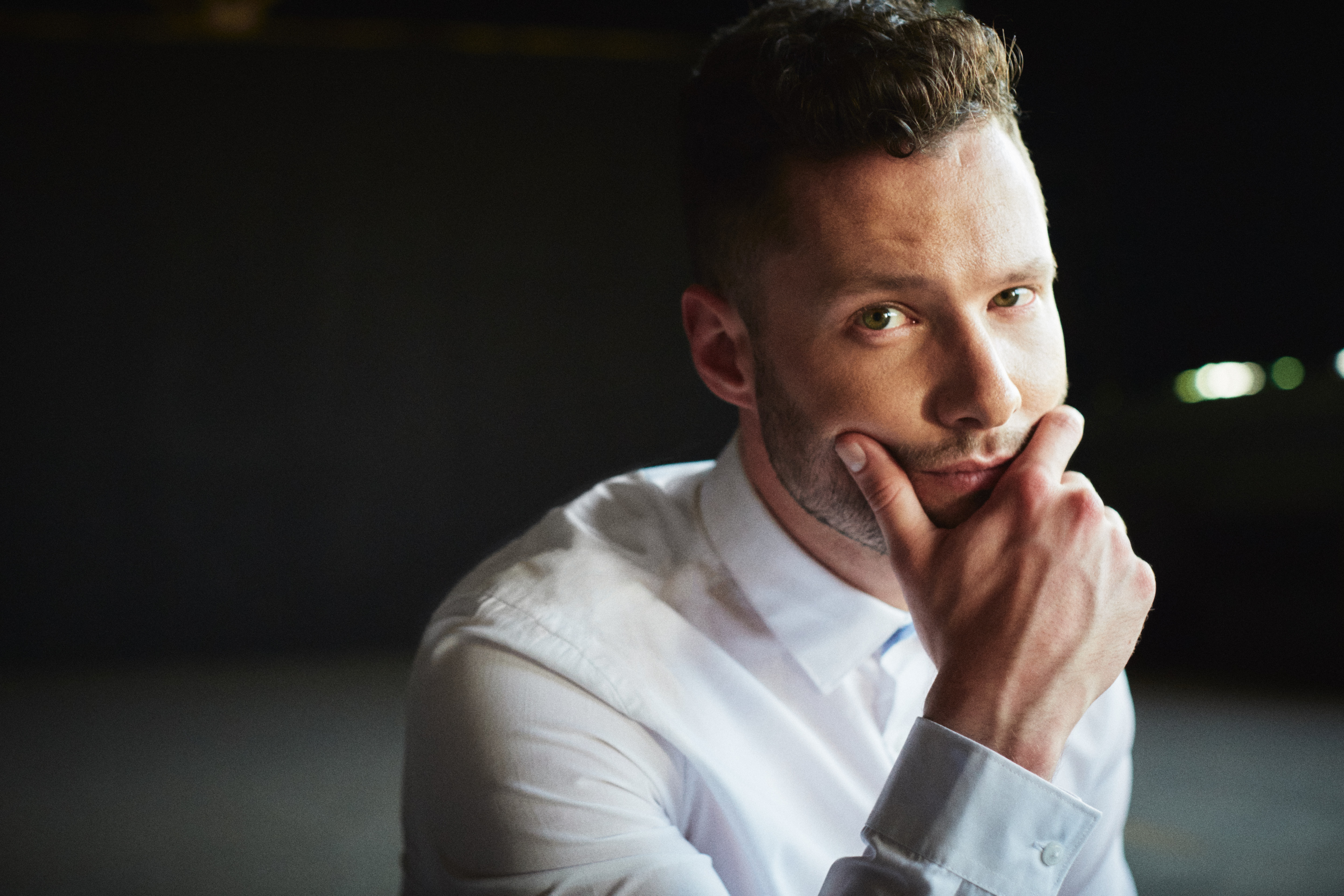 However Calum has his feet firmly on the ground, and he never thought he would get such a sensational reaction when watching the audition for the first time. Music was always something he loved, even though he became disillusioned after studying it in college. He gave it up for a few years to “go out and earn a decent wage.”

It was his sister, Jade, who encouraged him to pursue music again. While using her equipment to record himself singing, she heard and signed him up for a local karaoke competition. “When it came around she basically forced me into it, she told me ‘You’re going to be really good, you should do it.’ I was so nervous, but I literally pushed and pushed and pushed until I got up on stage and I was so used to the song. I caught the bug.” Jade was also the person who encouraged him to audition for BGT.

Highs, Lows and Breaking from the Mould

He worked with a Tribute Band of Maroon 5 for a while, but soon got sick of covering tracks. He wanted to try more original songs and “find his own identity as a singer.” So he started looking through acoustic tracks and finding popular songs that were made acoustic with guitar or piano. That’s where he came across the Robyn ballad and once he got a feel for the song, his family realised that he had something special in his voice.

It didn’t all go smoothly for Calum after he finished his run on Britain’s Got Talent. Simon’s record label, Syco, didn’t sign Calum up. His mentor on BGT and the man who had truly believed in him was now rejecting him and Calum admitted that he feared for his future in the industry. “I looked at that situation and I thought, well if Simon doesn’t want me, than nobody is going to want me. I’ve been on a massive TV show and Simon, the boss of Syco, doesn’t want me. I did fear for my career and I did think what if I don’t get picked up?”

This moment of uncertainty didn’t last long though because Capitol Records signed him in May of this year. Calum thinks he was lucky, but it was probably the fans pushing his single that caught the attention of Capitol, who have the likes of Paul McCartney, Rod Stewart and Sam Smith already on their books. He’s now working on his new album in the US and London and it’s something he’s looking forward to releasing.

He jokingly admits that there won’t be any rap, but says that it’s definitely a step in the right direction of where he wants his music going. “There’s some upbeat stuff, with a bit of pace and power so there’s a nice mix there. I think people will be surprised from what I’ve written already. When I perform songs live it seems to go down really well and people are like oh you should realise this as your next single.” If it plays on the heartstrings of the public like ‘Dancing on my Own’ did, then Calum will have a stellar career in front of him.

A Fresh Start, but what Style?

Listening to some of the other songs he sang on BGT and at live shows, it’s obvious that Calum will continue his self-penned, ripped-from-the-soul songs that captured the UK’s attention last year. His shy character disappears on stage and he exudes confidence when he belts out notes in his own distinct lyrical tone. His fans will be looking forward to an album that will help them over heartache, but also brighten their day when needed.

“I do want to keep my ballads and keep singing songs that relate to people. I want to keep writing music that people can take something from rather than a throwaway song. I don’t want a whole album where everyone will be in tears at the end, but I want people to feel the beat and stuff I’ve been working on, including the power ballads in there.”

Calum will be touring Ireland and the UK before Christmas, with his show in Dublin’s Vicar Street on October 4th sure to be a success. He has played in Ireland before and loves how welcomed he felt when he performed in front of “a warm crowd that were so engaged with the performances.” He cannot wait to play in Vicar Street and knows of the prestige the intimate venue holds.

He also recently announced his North American tour dates, always a big step for any fledging musician. He’s admitted that he’s never been in the US before, but it looks like his music is going to take him there. Calum will be making his TV debut over there on Late Night with Seth Meyers on September 14th, and Motley is sure that his affable personality and winning attitude will endear him to the American public. There will be shows in Los Angeles, New York, Toronto and many more cities throughout November in what is the biggest step forward in his career to date. It’s fair to say that, in his own words, he is “psyched.”

It’s been a whirlwind year for the young man from Hull, but he understands that hard work has got him here and will continue to bring him further. “I absolutely love what I do. I’m very privileged to do what I love and make a good wage out of it. It’s something I’ve fallen in love with and I’ve been very lucky. That’s why I meet as many fans as I can. I want the fans to know I’m so grateful for the position they’ve put me in on the charts.”

When Simon pressed the Golden Buzzer, he said that “I’ve never ever, in all the years I’ve done this show, heard a guy with the talent you’ve got. The version was sensational, and that showed to me that you’re more than a singer – you’re an artist.” From a man who’s judged thousands of young singers throughout his time on television, that’s high praise indeed. The future is bright for Calum, and Motley eagerly anticipates his new album.