Throughout history, we can see how fashion has progressed and changed as a result of world wide influence. Since the creation of Facebook by Mark Zuckerberg in 2004 and the launch of social media platforms, the world has gone through a huge shift in connectivity and knowledge, and is now more connected than ever. The modern world has become unrecognizable, as ‘everyday’ people find fame in showing off their personal lives and intimate information online. Fashion icons are created through the amount of likes they receive. For example, the Kardashians went from being infamous for their connection to OJ Simpson to being famous for their extreme body modifications and unique fashion style. With fashion shows at our fingertips and fashion influencers telling us what to buy and who we should get it from, have we fallen too deep into the rabbit hole of fast-fashion trends, or has the internet allowed us to truly express and share our individuality?

Social media has broken down the barriers between cultures – take Paul Mescal as an example; GAA sports, a staple in Irish culture, have been transformed by him. After an image of him wearing  his white GAA shorts with a gold chain was taken, we saw Gucci imitate his style by rebranding the shorts for an elite audience at the price of €550. A serious increase from the O’Neill price range of €16 to €30. We see international cultures influence modern day designers as the barriers between countries come down as a result of social media, namely TikTok and Instagram. Influencers are seen sharing everything, from the concept and construction to the showcasing of their designs. Yet, most of the time, we don’t know where our fashion inspiration comes from, culturally speaking.

Often, fashion is intertwined with the culture of an area such as Paris and Milan, not to mention the other fashion capitals of the world; New York, London and Tokyo. Indigenous fashion has integrated the modern world in a variety of manners. Tattoos relating to Indigenous culture have soared in popularity since the development of modern technology. A minimal style line work tattooed on to a person’s face is taking the world by storm as Shine Nova releases a TikTok of the traditional facial tattoos of the Inuit people, taking ownership of her heritage. Indigenous people incorporate art in their clothing, a style which has inspired modern haute couture and international fashion. This has been seen in Ralph Lauren’s Santa Fe clothing line in the 1970’s and 80’s. In this collection, we saw the inclusion of sweaters, petticoat skirts, blanket jackets, concho belts, and other items infused with Native American fashion designs. This inspiration can also be seen as a form of cultural blindness, appropriating the aesthetic of a culture without sharing any of its meaning and struggle. For something like the Paul Mescal shorts, the disconnect can be seen as incongruous but well-meaning, but it is more difficult to come to terms with it when it’s the aesthetic of oppressed Peoples that is appropriated by high-fashion houses. These luxury brands are then profiting off of the cultural heritage of those who were violently persecuted.

The fashion industry thrives by observing how the cultural change in different countries around the world. They watch and see whether a country is becoming more conservative or liberal, more naturalistic or how well the economy is doing. As we saw during the Second World War, there was a drastic change in women’s fashion as supplies became limited. Popular colours became those which mimicked men’s military uniform, and, to conserve fabric, skirts became shorter with slimmer silhouettes. Women’s clothing became more ‘masculine’ and practical as they were encouraged to replace men in industrial industries. Today, we see an extreme shift in men’s fashion as social media reminds society that clothing has no gender. Images of a young Jackie Chan in a low cut, black, netted top and of Harry Styles wearing a dress on the cover of Vogue have flooded social media, encouraging young men to relearn their definition of fashion. It would be fair to say that not everything about social media is positive, but it is important to recognise that they help wear away societal expectations about what it is to be a woman and what it is to be a man. Despite the increasing issue of fast fashion- circulated by many fashion influencers, we are seeing positive changes in modern fashion. We are not limited in our identities and we are not restricted in our choices; clothes are made to fit the person, they have no gender and they have no limits. 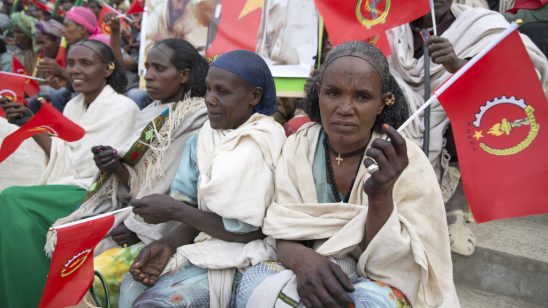 The humanitarian crisis that no one is talking about: Tigray