Emily Freud explores President Rodrigo Duterte’s campaign of ghastly brutality against the Philippine drug trade and those who populate it.

Could you imagine a world in which a President not only permits but encourages murder of citizens by citizens? It sounds like the start to a dystopian novel. However, this is the reality in the Philippines’ war on drugs under the current reign of President Duterte.

Under the campaign known as “Double Barrel”, a movement established to tackle the problem of drug lords and pushers, anyone suspected of engaging in such practices are to surrender themselves to the authorities or risk the possibility of being murdered. This program works in conjunction with “Project TokHang”, a campaign less aggressive than “Double Barrel” which requires increased policing. This second platform has seen officers visiting over three million residences on a door-to-door mission to persuade users and pushers to surrender peacefully. Such measures have resulted in over one million users and pushers surrendering themselves.  However, based on dissonance between police reports, often chalking deaths up as “unexplained”, and family accounts, it appears the murdering has gone rampant. It looks as though President Duterte is staying true to his word to “slaughter them all.” He does not seem to have any semblance of remorse and even has gone as far as to proudly liken his war to the actions of Hitler.

President Duterte began this brutal process of eradication of the use of drugs while he served as the mayor of Davao. Known by many as “The Punisher”, he created his own “Death Squads” – groups of contract killers known to travel by motorcycle. Before his election to office, Duterte made a pledge that 100,000 criminals would be killed within the first six months of his term, the statement having a particular emphasis on drug dealers whom he believes have the capacity to destroy the country. Duterte’s rationale seems underpinned by the fear and imminent risk of the Philippines becoming a “narco state.”

In response to criticisms aimed at this brutal campaign, President Duterte has threatened to withdraw The Philippines from the United Nations.

To those that may question the brutality of this method, he claims that with a broken and slow justice system, coupled with crowded prisons, his approach is not only more efficient, but has proven to be successful.  Rates of methamphetamine use have fallen from 6.7 million users in 2004 to 1.7 million users today. However, the overcrowding in prisons has worsened; in cramped conditions prisoners are to be found sleeping wherever there is space, filling open areas like basketball courts and yards. Still there are those left without a place. Regardless, Duterte has retained this severe standpoint with little, if any, remorse.  There are citizens who essentially admire this war, often blaming methamphetamine, known as “shabu”, for rises in crime.

Most, however, fear walking the street at night. There is no safe haven; bodies are turning up across Philippine cities from uninhabited alleys to the front of a girls school –  it appears there is no limit to the cruelty. Local papers have started a running “kill list.” With the death count over 6,000, the list seeks to keep track of the numerous tragedies. In response to criticisms aimed at this brutal campaign, President Duterte has threatened to withdraw The Philippines from the United Nations.

There is one particular story of intrigue which emerges from these sickening circumstances – the female assassin known as “Maria.” A civilian mother and wife, she has taken up killing as a full-time job. So far, she has killed six people alongside three other women that make up one hit team assembled by police forces. Maria came into this position through her husband who was originally assigned by police authorities to kill a pusher, specifically one that was indebted to the police. It was when they required a woman to complete a kill that Maria became involved, her husband having advised police officers that she would be capable of providing the necessary service.

The advantage of female assassins lies in their ability to get close to the victim without arousing suspicion. Despite her usefulness to the authorities, it is Maria’s wish to leave the “business”, but she has already been threatened with punishment of death should she follow through. As if this threat was not enough to keep Maria in line, there is also almost a sense of necessity involved, as prior to her “employment” their family had no reliable source of income. They now earn 20,000 pesos per hit.

However, Maria has regrets and lives in fear of both her employers and the families of her victims. Her guilt is concerned not only with the  families of her victims may harm her but her own family, too, and what her children will think when they discover what she does to ensure their survival.  She and her husband do not talk about their work aside from the logistics of individual hits.

While she finds some solace in the Church allowing her to beg for forgiveness through the sacrament of confession, she does not specify what it is she is confessing to and therefore, under Catholic doctrine, she cannot fully be absolved of her sins.

There is some concern surrounding President Trump’s invitation to President Duterte to visit the US, along with his support for the anti-drug campaign, in all of its brutality.

Churches across the country have responded to the violence with pleas for non-violence and have provided rehabilitation centers in response to the overwhelming number of addicts coming forward as a result of “Project TokHang.”

Further accounts from those living under the Duterte regime highlight the plight of the individuals targeted by the joint anti-drug campaigns. One such account is that of an addict currently on the run. He expresses remorse both for his actions and his influence on the drug trade but he clearly specifies, “I’m an addict, I don’t kill.” The addict recounts his start as a young laborer who took up dealing drugs to continue supporting his addiction, one who often sourced his supply from corrupt members of the police force. “The hardest part of all is I don’t know who to trust, I don’t know which direction to go, every day looking for a place to hide [sic].”

As of now, there seems to be little social awareness of the goings-on in the Philippines. In terms of governmental response, the United States did halt the sale of 26,000 assault rifles in 2016. However there is some concern surrounding President Trump’s invitation to President Duterte to visit the US, along with his support for the anti-drug campaign, in all of its brutality. There are various human rights groups calling for action, for some kind of response to the horror unfolding in the Philippines. Politicians within the Philippines have also responded to the sustained campaign against drugs; Senator Leila de Lima appealed to the public in an article in TIME magazine to lend support to the view that these actions are crimes against of humanity. It is this writer’s sincere hope that governments and legal authorities worldwide will not only start to take notice but take the long overdue action necessary to put a stop to the inhumane brutality. 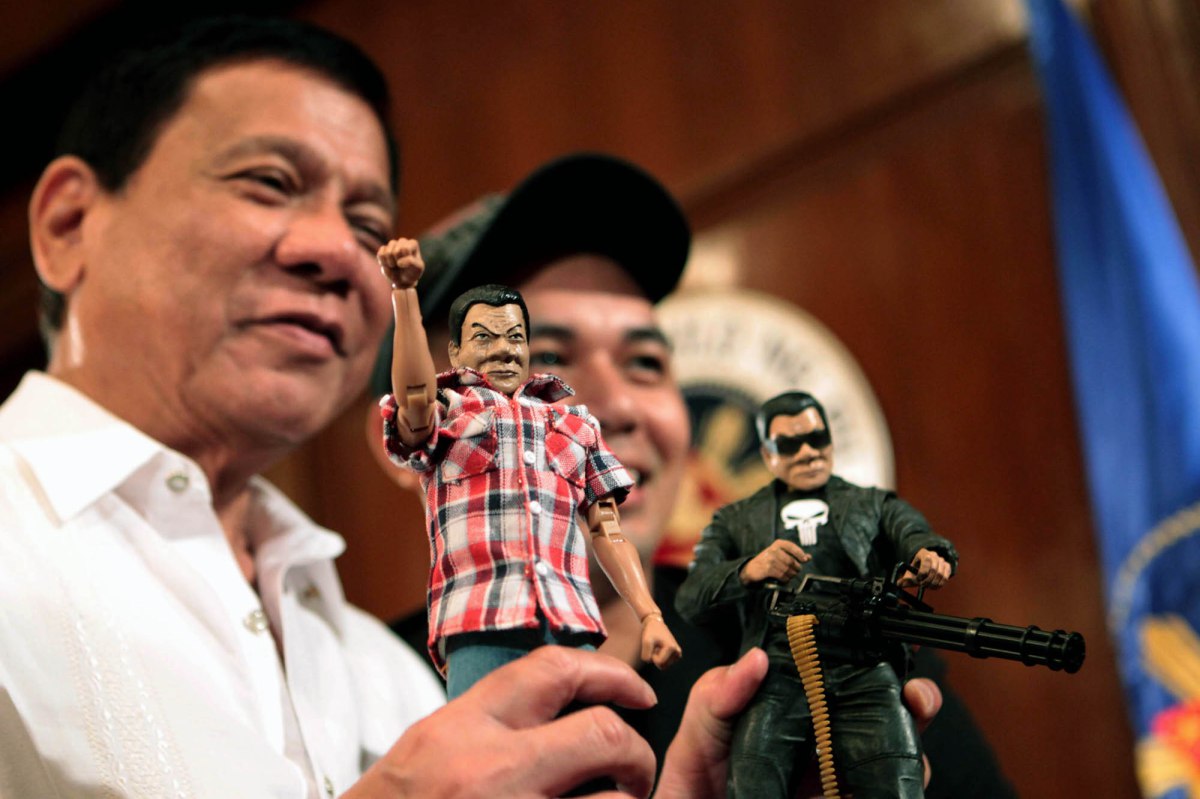