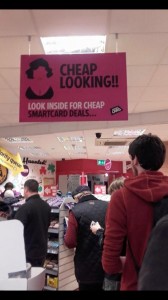 “A campus café has been forced to remove its latest advertising after students described the signage as sexist,” writes the Irish Examiner.

And describe it the students did. Prior to its removal, there were varying opinions being voiced; all shouted loudly, venomously, repeatedly, and predominantly on social media (as cowardly students are all too apt at using as their go-to “outrage outlet”).

The pink advertising for UCC’s SmartCard services on the ground floor of the Student Centre bore slogans such as ‘What’s Your Cup Size?’, ‘Cheap looking!!’ and ‘Does my bun look big in this?’ all accompanied by vague illustrations of women’s torsos.

Upstairs posters, which most people missed (not because “they hate men” but because, really, who goes upstairs in the Student Centre during the day?), show a green “male version” of the ad appearing to depict a pear. These versions encouraged everyone to “grow a pear” in order to be clever enough to use their SmartCards.

(Ten points to Gryffindor for not making the male ones blue, I suppose). 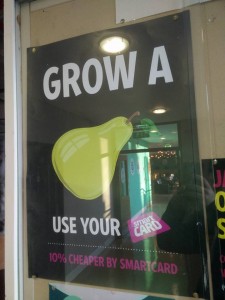 While most UCC students will be aware that the SmartCard system is borderline 2am-without-the-shift-yet desperation level, that might not be such common knowledge to the national media outlets covering the backlash to this marketing campaign:

“UCC SmartCard is being accused of sexual objectification with their newest campaign. I’d call for a boycott but nobody’s using UCC SmartCard anyway, so a boycott is the default position,” says Colm Cahalane, a third year computer science student.

If I didn’t already think UCC SmartCard was a terribly pointless idea in its foundation, they’ve certainly cemented my convictions now, by appearing as equally out of touch with good marketing strategy.

If I didn’t already think UCC SmartCard was a terribly pointless idea in its foundation, they’ve certainly cemented my convictions now, by appearing as equally out of touch with good marketing strategy.

This advertising bothered me. It’s lazy. The wording doesn’t even make a whole lot of sense, and I’m just not entirely sure where the card system comes into it all. It got people talking, sure, but SmartCard now appears even less intelligent than ever before.

“Looking Cheap” is a fair way to describe the SmartCard system right now, but the Student Centre does not come cheaply.
We pump these people with funds and capitations fees (and can we talk about the price of the food in there?).

Not to mention that we’ve got an entire department of students looking for careers in business and marketing. I’m sure many among them could have pulled off something even mildly successful for this campaign.

The main reason it bothered me, though, is because I’m hilarious. While I’m also a feminist, yes, I predominantly found it insulting as a funny person.

The least the Student Centre could do is represent our university as successful in its attempts at humour. Honestly, I’m really hurt. It’s worse than the “Boole is Cool” t-shirts.

It’s all very embarrassing, and insulting not just to my amazing sense of humour but to my intelligence, and the intelligence of the 20,000 other people studying or working in what is a third level institution in a developed part of the western world.

I’m unsure how it all happened, really, with so many smart, funny people like me around the place.

I’m glad the sexist signs have been addressed. Equally, I’m glad my “Boole is Cool” nightmares are over now too.

Something else that’s not so funny is the backlash UCC’s Feminist Society (FemSoc) are getting for airing their concerns about the advertising.

As a disclaimer, I’m not on the Feminist Society and never have been, but I’ve been really impressed with them this year.

In sum, UCC Feminist Society are a student led society who seek, among their aims, to promote gender equality on campus. As a result, it was natural for them to share photos of these signs online when students raised concerns and brought it to them to address.

It all seems so simple.

Yet, at this point, FemSoc’s seemingly simple Facebook post has about 180 comments, over half of which are sheer abuse and harassment.

Some of these comments are themed something along the usual lines of: “Hey FemSoc, stop standing up for women when men exist.”
There are also many stating that the “grow a pear” sign objectifies men, when arguably it’s more offensive in its implication that women or Trans* people need testicles to make good financial decisions.

One person even posted a photo of cartoon character He-Man, and asked FemSoc to explain why everyone always complains about Barbie setting a standard for women, when He-Man sets a standard for men.

Enlighten me, fellow students of FemSoc, why did this entirely unrelated topic of an 80s TV show set a standard for this male student? Furthermore, why does this expert not see the irony in overlooking the fact that He-Man’s counterpart She-Ra did exactly the same thing for women as He-Man did for men…?

From what I’ve seen of this year’s Feminist Society, it seems entirely clear that “man-hating” is not the vibe they are going for.

In October, I was loosely involved with Breast Cancer Awareness month. During that campaign, FemSoc were the ones sharing information about Male Breast Cancer, not the charitable societies. In November, they celebrated International Men’s Day (photos attached) and shared information about men’s mental health and prostate cancer, as part of Movember.

Feminism liberates and seeks equality for everyone, which though many commentators seem to have overlooked, FemSoc certainly haven’t.

Seeing negativity in the word feminism is akin to the struggle many men have when they appear as anything other than overtly and stereotypically masculine; the prejudice against femininity is linked here.

Hence, feminism could really help a brother out, if everyone could just relax about it.

In the comment stream of FemSoc’s simple post, many are also sharing links to news stories of women who have been victims to Female Genital Mutilation or rape. These people are telling FemSoc to check their privilege.

As stated above, this UCC based society are a small group of Cork based students. They make quite an impact for such a small group, but there’s little to nothing they can do to stop Female Genital Mutilation happening across the globe.

They did, however, succeed in having these signs taken down, and so they helped the students who were offended by it feel less uncomfortable in their University.

(10 points to FemSoc for completing their constitution’s goals).

It made me sad to realise my initial reaction to the advertising was unfounded. UCC students clearly aren’t as funny and intelligent as I thought. Or, at least, a large proportion of them aren’t.

The irony of it all is interesting. There’s suddenly a surge in students labeling anyone who voices a belief in anything as the “Political Correctness police.”

Yet, if you do this, you are evidently censoring people by throwing your beliefs down everyone’s throats too, which is exactly what you’re calling other people out for doing.

In any case, it’s not exactly “political correctness gone mad” to want derogatory signage removed from our alleged “tradition of independent thinking” here in UCC. I mean, everything else aside, gendered marketing is about as far from independent thinking as one can possibly go.

It’s basic at best, and it’s problematic at worst.

The fact that it’s problematic went on to be proven before my eyes when a fake Facebook page called “U C Sea Fuminust Scotity” was launched, parodying the actual Feminist Society. Typing in that supposedly witty computer speak, the page writes things such as: “pls sign my petition 2 ban jokes, tey are all offunsuve!”

Hilarious! Aside from the fact that this is bullying and online harassment, this page soon went straight for the rape jokes.

Again, can we do something about the lack of originality in all this?

The fake page shared a photograph of a woman stating that all men are rapists, and updated their cover photo to imply feminists believe everything is rape.

And so, this brings me back to ‘What’s Your Cup Size?’, ‘Cheap looking!!’ and ‘Grow A Pear.” In this online storm in a teacup debate, we jumped from objectifying each other, to belittling the severity of rape allegations in a matter of hours.

The question of “political correctness gone mad” ends here. I’m almost certainly not politically correct at the best of times. But when we accept and normalise rape jokes it becomes an excuse to victim blame.

It becomes a way to justify improper actions as the “banter” or “drunken behaviour” so often discussed about in University life, and a way to sugar-coat the fact that students are raping and harassing each other.

Not Linked to a Real Problem

In the comments sent to FemSoc, one of the main feelings on display was that “this isn’t a real problem.” Students and commenters felt that FemSoc should concern themselves with something that “really matters.”

Silly derogatory signage is just the beginning of it, I understand that, and these ones were presumably not meant to offend or cause hurt.

Yet, the evidence that this type of cheap “humour” always makes way for something bigger has been shown by the fact that the backlash from students to feminists promoting gender equality instantly turned to rape “humour” and accusations of “victim complexes.”

This type of language and state of mind all feeds into everyday human behaviour, and so the reactions from students towards the Feminist Society is easily far more worrying than the signs themselves.

The number of students in Ireland I personally know who have been sexually assaulted or raped, both male and female, is in double digits. As a result, I find it difficult to believe something like this doesn’t matter, and that FemSoc shouldn’t concern themselves with it.

If FemSoc can stop this objectification at the beginning of the spiral that is university rape culture, then why shouldn’t they? It’ll make a difference to a real problem; one that really matters.

So, let’s all stop for a minute and think about how much basic gender equality is worth investing in.

Less with a SmartCard, anyway, am I right?