Entertainment Editor, Gemma Kent, chats with comedian Edwin Sammon about his new tour and the power of laughter.

The best part of doing interviews is when the person on the other end has you laughing your way through it. That’s laughing with them, of course; like how Edwin Sammon’s opener to our chat had us both chuckling within seconds, as he told me the woeful story of the curse of the middle child and how that, and a love of the muppet show, was probably where it all started. “I was the middle child, so I was always desperate for attention. I had this conspiracy that I was adopted because there were loads of pictures of my older brother and very few of me – I realise now that that was just parent fatigue… That said, I wouldn’t say a need for attention made me interested in comedy per se. Though I very much enjoyed the muppet show – weird and subversive stuff like that. A lot of it went over my head but I remember thinking ‘this is funny and I don’t know why’. I just reacted to it on a gut level.”

Coincidently, the best part of doing interviews is also the worst part. You’ve not known the #struggle until you’ve spent a solid hour trying to work out what that one word your interviewee said was, muddled as it is behind your own ludicrous laugh. There goes a great quote for the article, you think. The world will never know what Edwin Sammon had stuck to his hat during his school performance of Fiddler on the Roof.

(You eventually get it, of course, because you’re a stubborn brat who refuses to skip ahead).

“A bottle,” he tells me. “I was a Jewish man with a fake beard glued to my face because I couldn’t grow an actual beard [insert disbelieving laugh on my end] and they rigged the hats with Velcro so we could stick a bottle on and pretend we were balancing them.” He goes on to tell me the joy he felt at making people laugh that night – even if it was people laughing at him. “I remember one night not putting the bottle on right. So when we knelt at the front of the stage – the front row filled with national school kids pointing and laughing because the bottle’s hanging off my head – all anyone can hear through the microphone is this ceraaatch as the bottle falls off. And I thought that was kinda funny. I came off the stage and everyone was like, ‘oh no, that’s terrible’ but I was just laughing at it.” 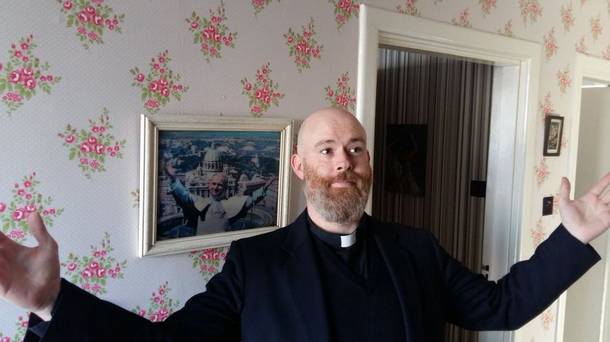 Edwin Sammon is best known for his role as Fr Gabriel in the Irish TV series, Bridget and Eamon, and also for his various performances in stand-up around the country, from his homeland of Offaly, to Dublin, Cork and everywhere in between.

It’s an impressive CV, a fact bolstered by the fact it’s been filled primarily over the last few years, Sammon having split efforts between splitting sides and selling hardware until around four years ago. “I was in college and I was working in a DIY store – one that I can’t name for legal reasons,  though I can say it rhymes with ‘Goodies’ [more heehaw laughter from me]. When I dropped out of college I started working full-time in Woodies. But my boss was very sound (and very fascinated) about the fact that I was doing standup, and when I would need time to shoot a sketch for Republic of Telly he’d be very flexible. He was very supportive of my endeavours.”

It was here in Sammon’s story that things took a different turn than one might expect. He informs me that in 2013 he was diagnosed with cancer, putting an end to his time at DIY hardware, but not DIY comedy. Being a topic that most people  – particularly those OTT-polite, Irish people like myself – avoid, I had resolved in the days before the interview not to ask Ed about his experience with cancer. It takes a lot of courage to bring up something so desperately hard to speak positively about. So it speaks for itself that he’s the one to bring it up instead, unflinching as he continues on his narrative of the road he took to comedy. “I was diagnosed with cancer at the end of 2013. Some people say ‘you obviously stop doing everything [when you’re diagnosed]’ but I say, ‘no, no. I shot [the ‘Every Irish Funeral’ sketch  from Republic of Telly] and the next day I went for chemo…

“I kept working. I needed to do it, to have something to look forward to. The adrenaline rush of making strangers spontaneously laugh.”

What I think was most extraordinary about Sammon’s account of this period of his life was its perfect mix of the candid and the humorous. At once, I was compelled to feel sorry for him – to want to apologise for hearing about it at all  – and the next, I’m feeling like a wretched human being because he’s just taken the mick out of his cancer experience and it’s stupidly funny.

Yeah, I just put “funny” and “cancer” in the same sentence.

He tells me of one case in particular: “You’d be amazed the amount of times people would say, to my face, that chemo was a waste of time. Actually, one person told me that people got cancer because of bad karma. Yeah… to my face… I kinda let that one go. I was in that mindset of ‘calm blue oceans, happy thoughts’. I was extremely positive the whole time. Only when I started to get better did my cynical nature come back.”

I think this fear to mention things like death and cancer sums up why Irish people can fall short of talking more about the things: we can’t laugh about it. Rather, we feel we can’t. We think it’s offensive, or inconsiderate or inappropriate to make light of these issues the same way we make light of absolutely every other problem in our lives.

That’s what Sammon’s out to change with his new tour, Edwin Sammon vs Cancer. He’s bringing the story of his experience with cancer to the public, and he’s going to make them laugh at it, whether they want to or not. “It was my own coping mechanism. You joke about something so you don’t have to realise the full seriousness of it. Obviously, there were times when the full weight of it would come crashing down on me. But you have to laugh as well. Otherwise, you get too scared. And also, in a way, [making fun of things] is my job.” 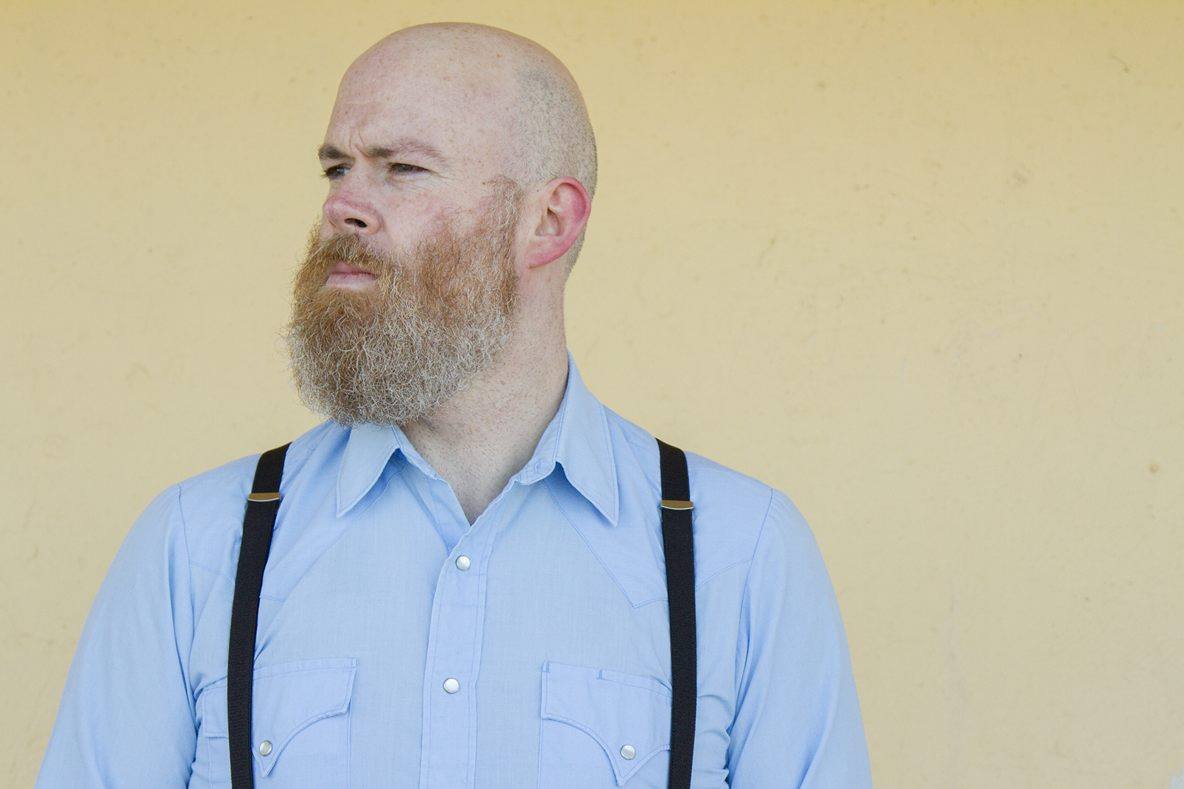 Of course, the natural question is: are you afraid people won’t laugh? And, worse still, are you afraid they’ll be offended by it? For this, Ed has another anecdote to share. “I used to run a joke, not about suicide itself per se but, about people’s reactions to it. And after one show, a woman came up to me and said ‘Funny set, but you should drop the suicide jokes.’ She obviously knew someone who had taken their own life and I said that I knew someone too. ‘So why shouldn’t we talk about it?’ I think you shouldn’t repress anything like that. It should be discussed. And for me, I’m not talking about anyone else’s cancer. Which is why the show is called what it is. It’s my own experience.”

Not only, then, are we dragging cancer into the light, we’re also sapping it of its power. No longer is it Threat-Which-Must-Not-Be-Named but something to be faced, something to be treated as surmountable. It’s the Dark Lord of subject matter and we’re calling it Voldemort.

“In some ways people think that when you make fun of something you’re making light of it, not treating it seriously. But to them, I’d say that comedy is extremely fucking serious and I treat it very seriously. It can be a very powerful thing.”

The cure, then, perhaps not necessarily to cancer itself but at the very least to the stigma around it, lies in laughter. The sooner we can laugh about it, the sooner we can talk about it, flesh it out, and take it on. And the power of laughter travels beyond the realm of keeping us physically well — it’s also possibly the only thing that’s keeping the planet sane right now.

And I’ll be the first to admit it: I can’t write anything nowadays without mentioning Trump in some shape or form. But it’s worth pointing out that I’m not entirely to blame for this instance of name-and-shame:  Ed is the one to mention the American clown in question, seeming to read the question right off my notes. “Trump is in some ways a great thing in that he galvanises people against him. And it’s a good thing for comedy because in spite of extreme fear and uncertainty and terror… that’s where comedy flourishes. And now you have this bizarre scenario where Arnold Schwarzenegger is the voice of reason, quoting Abraham Lincoln at Donald Trump. Arnold Schwarzenegger is now the guy making sense. I never thought we would end up here. It’s gonna be an interesting 4-8 years… unless something awful happens.”

When I listen back on that last remark later on, my own ridiculous laughter a happy backing track to it, I regret a little less that it takes me ten minutes to tease out the full extent of the words. After all, I say to myself, what I’m listening back on is the sound of the comedian’s cure-all, and the best part of the interview.

Edwin Sammon performs at the City Limits in Cork on the 18th of February. 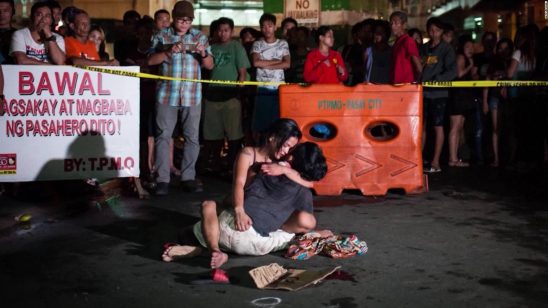 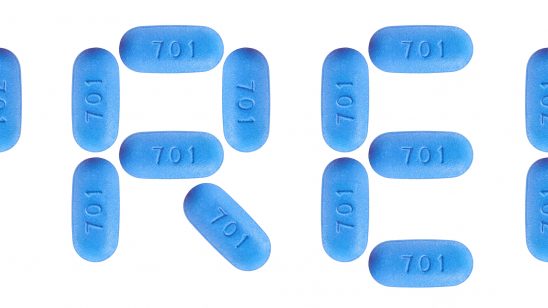 HIV: Where There Is No Cure, There Can Only Be Prevention