Gemma Kent speaks to Luke Branch of Asylums about being an independently funded band, optimism and being his own boss

You would expect the lead vocalist of a band that describes their genre as “Nostalgia Pollution” to be a cynical kind of guy. Throw in the fact that it’s an independently funded band, and you might picture someone altogether disenchanted with the world, moaning about low budgets and the gruelling task of paying for their own petrol. Luke Branch of Asylums is anything but. Witty, down-to-earth, and a proud user of the word “wicked”, the Southend-on-Sea chap is something of a humble optimist, especially as he relays how his band found success against all expectation, and how this success is something he hopes more independent bands will achieve in the future.

“I guess my whole life I’ve always loved guitar music. Around the time I was thinking I might like to move away from music and focus on other things, I was going back to records I’d been listening to when I was fifteen or sixteen — records that had been a real influence on me. From there, one thing led to another and I started coming up with this music that didn’t sound like anything else I’d ever made before — it was rooted in what was going on at the time. So I reached out to friends of mine and asked if they wanted to play as well. We went to a couple of rehearsals, didn’t think much on what we intended to do and just recorded it straight away. We turned out a huge amount of material in just one week — most of it we threw away but we kept little bits here and there! And because of the spontaneous nature of it all we were thinking, “Should we try to find a manager or a record label?” And then we just thought, “Nah!”” — he laughs — “We decided we were capable of putting a team together on our own. So we roped in all our mates and then… we just did it.”

In the lead up to our phone call, I read that the band had ‘boycotted’ social media in their early days, opting to promote their work the old-fashioned way: by word of mouth. Though that later changed (they have Twitter, Facebook and the works now), I was curious to know why they had once been one of the most difficult-to-find-bands on the internet.

“It’s difficult to explain but just as I was finishing my previous project and before I started Asylums, I began to feel a bit insecure in myself. As a result, I decided to come off social network and take a break from measuring myself against other people. During that time — as a sort of by-product of my situation — I started to listen a little harder to particular songs, and read more than I had been before. I started to write a hell of a lot more and I started to feel the same way as I had when I was fifteen. I was just sitting in my room, investigating music, and it felt like I was in a little, protective bubble.

“So as we came towards the end of our first demos, I got really scared about going back online again. I felt that all this good stuff had happened without social media so I suggested to the guys that we not go back on for a while and let word of mouth build up. If people liked our music enough, we could always move online and if they didn’t, well, it was no big deal.”

Seeing as ‘Killer Brain Waves’ went on to rank number 31 on the Official UK Rock Album Chart, it’s clear that the band went on to earn the popularity they had been hoping for. Opting to go online was a natural — and necessary — follow-up, Luke explained.

“The problem in the long term is that you start to exclude people. If they don’t happen to live near you then you’re stopping them from being able to find or listen to you. So when it got to the point of having a bit of a following forming for us and having some radio support, it just felt like an honest and good thing to do to just open it up! And I really enjoy it now when I use it.”

Of course, there’s more to a band than a backstory and online presence —and the next step is where most of us could predict the uphill battle to really begin. Managing your own label isn’t cheap, and, as Luke pointed 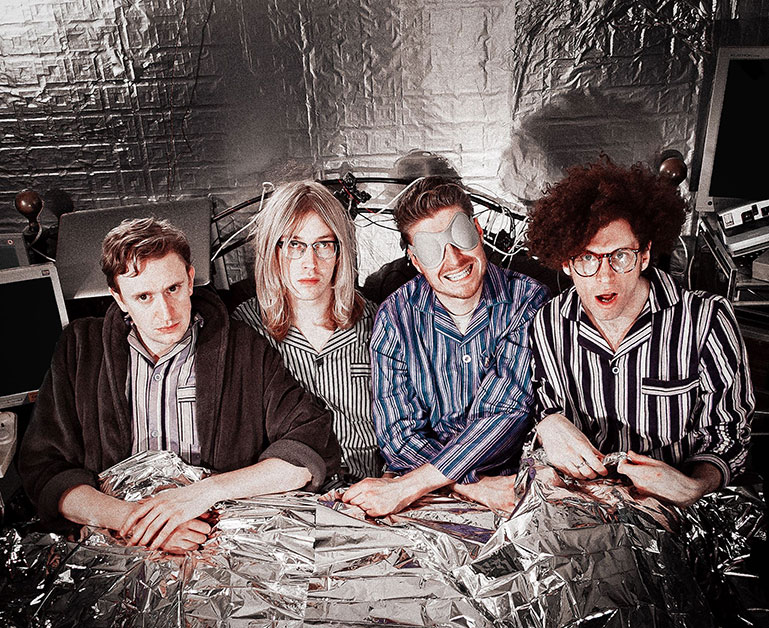 out, they have to pay for everything: from petrol and guitar strings to recording sessions. One of their songs, ‘Joy in a Small Wage’, deals with this issue and — if you take is as something of an autobiography — suggests that the four
aren’t exactly rolling in money. I was curious to know, then, if their music was their only source of income.

“Well, no,” Luke admits, offering one of those self-deprecating laughs. “We do various things: we write music for other people; we do bits of DJ-ing; Henry [the drummer] does music scores for adverts. At the end of the day, it’s all music in some way or other, but in terms of making aliving purely out of just releasing records and touring, we don’t. Though, we are at the point now — two years in — where we don’t lose money doing it. So, maybe one day, it will be ‘Joy in a Modest Wage’! But for now, we just see it as a kind of art project.”

This minimal profit didn’t stop the boys, though. As Luke hinted at earlier, their band actually succeeded in getting a number of plays on BBC Radio and Radio X. Seeing as Luke had claimed that what they do will “never give the charts much hassle”, I had to ask if their radio exposure was luck, or something they worked for. A bit of both, it seems!

“Our radio plugger, Rhys, had just set up this company called Martian PR, so he started doing some work for us. He’d had some modest success before this, but he kind of built up the company as we built up

our band and it’s been wicked. Neither of us was based in London — him with his small PR company and us with our small label — and it felt like we were on the same page because of it. And I don’t know if you know much about radio pluggers” — I checked it out afterwards: Radio Pluggers try to get exposureon the radio for the band they are representing — “but it’s an unpredictable game and you never know if you’re going to get any results from what you put out. I think we would have been happy with just one play, but Rhys was just really good at his job!”

Asylums were also fortunate enough to support multiple acts over the years. While Luke couldn’t bring any to mind (there are a lot!), he did emphasise the amazing experience that such gigs were for them.

“More than any one specific band being more enjoyable than the others, they’ve all been wicked as a whole. It’s been great to play all the big venues that we’d previously been going to see gigs at. Like I remember, about a year ago, me and Jazz went to see The Cribs at the Roundhouse in London. A week later we played the very same venue!”

To wrap up our conversation, Luke highlighted some of what he believed to be the advantages of being your own boss, emphasising, as always, that money doesn’t always dictate your chance of success. He also offered some great parting thoughts on the independent route as a whole.

“The independence is a great thing. In addition to control, we get to live in the pull paradigm, where you create things that pull people in. So when you’re in charge of how you release your music and how you present it online, then you have a great opportunity as a creative person to pull people in. You get to take the creativity that you used to write a song and apply it to marketing techniques and front covers and music videos. And, okay, you might not have the budget to do everything that you ever dreamed of, but sometimes limitation is a really good thing — almost always, I think. You start to think more openly around the problem and use what you’ve got around you to make something really compelling. Budgets go out the window, but that’s the charm of it: money doesn’t always equal artistic success. Sometimes it does, but I think it can happen both ways.

“And I was hoping that if there are some young bands out there that aren’t sure what to do then they consider at least getting the ball rolling themselves. I think that in 2016, it’s becoming more and more common that people operate that way. Eventually you’ll have more bands saying it can be done, that it’s possible to get results — and that’s what it will take. Then the next wave of young bands that come along will not only deal with their work and promotion the way they want, but they will also have some solid examples of bands that started independent but didn’t go completely unnoticed.

“Because I don’t think we ever expected to do anything like this — I don’t know what we expected! When it’s your thing to make art, you just do it and you never know what’s gonna happen. Any creative endeavour is a gamble, but, you know what? You’re doing it and you’re doing it for a genuine art reason and I don’t think you can ever be disappointed.”
Asylums are touring in October to promote their new album, ‘Killer Brain Waves’, which is available now to buy on iTunes. And you can take my word for it: it’s wicked.