When one thinks of Wirral, a small peninsula near Liverpool, you might be forgiven if no famous names come to mind.

On closer inspection, you will find the area boasts a pretty impressive repertoire which includes the likes of Elvis Costello, Miles Kane, The Coral, 007 himself Daniel Craig and, possibly most impressive of all, infamously loopy Premier League referee Mike Dean. It is quite possible that soon another name can be added to the list of Wirral success stories, and that name is Laurie Shaw. The UCC graduate recently released his new album, Not A Dry Eye In The House, and is ready to start making some waves.

Shaw took 3 months to record and mix his latest record, the longest he has ever given to an LP. In usual terms that seems quite short, but when you consider he used to just take two weekends in his parents house in Kerry to write and record a full length album, it is quite a long time indeed; “Last year I did about 15 albums or something like that, I done a load,” Shaw revealed in his dulcet, thick Liverpudlian tone, but admitted that being renowned as prolific can be a double edged sword,“In some way it sounds good but it doesn’t necessarily mean it’s a good body of work. I’ve done stuff that I really liked but it would just be another song. Now it’s a case of getting the good stuff in one place.” Shaw says he is enjoying the freedom the longer approach is giving him, and claims he is still working fast, but the difference is he is not showing his hand straight away and moving onto the next project, he is taking more time to sit on things and expand them rather then just throwing them out. 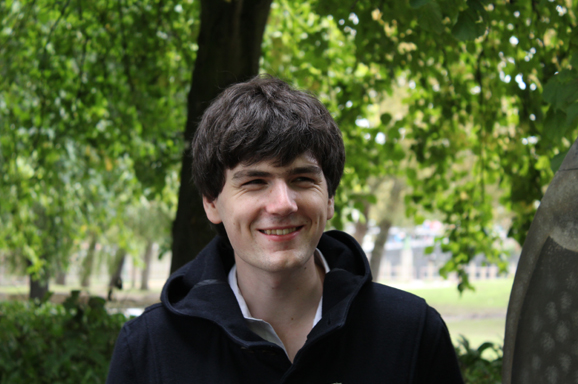 Although Shaw does now have a band at his disposal he still takes it upon himself to write and record everything instrument you hear on his new album, even though no two songs are recorded with the same process. “It’s not as simple as just sitting down and writing a song on guitar. I wish I could do that, just sit down with the guitar and write like 12 songs and then go and record them. Mostly what happens is I get a bunch of lyrics first,” he said. “Then a lot of songs are just built up as I recorded it. So like in “Cannibal Girl” I just came up with the guitar and then I’d add stuff to it and lyrics were the last thing I did. So it varies in what order I do stuff”.

Shaw latest record does slightly lend itself more towards a singer-songwriter style, as was evident when he opened for psychedelic Cork outfit The Sunshine Factory with an acoustic set, and even gave his band the chance to top up at the bar half way through his album launch, so he could do a few numbers with just his voice and a guitar. Both approaches are equally impressive. The intimate acoustic sets allow you to really listen to the lyrics and follow the fantastic imagery, while the songs take on another life as indie rock essentials when played with the whole compliment. Shaw feels the band sometimes treat his recordings a little too much like gospel, “Sometimes I think they treat the original recordings a little to sacredly. They feel as if they should make it sound exactly like it but I’d quite like their energy to come into it and change it if they want you know? If they wanted to kind of expand it, cause they’ve all got different styles”.

When you really listen to them, Shaw lyrics are truly impressive and he creates vivid images throughout the album. Tracks such as Jenny describe perfectly the absurdity and confusion that often surrounds relationships with the opposite sex in a freshly post pubescent world, while other tracks offer a brutally honest self-examination (Hey I Jumped Out Of A Tree No.3) and provide advice on how to escape adolescence unscathed.

When quizzed on the narratives that Shaw weaves in many of his songs, he ensures they are extremely literal, “Some of them are just accounts, like the song Jenny. That’s on the nail, that’s exactly what happened, but it’s just sort of trying to work out what to say and how to get it in an interesting way. Same thing with Foyer Song, which is just about Body and Soul festival”, “I suppose it’s kind of trying to self mythologise stuff, like the one about me denim jacket. That one is almost like chasing the golden fleece or something.”

The refreshing honesty with which he describes his innermost fears and desires ensures the consumer that these emotions are raw and in no way contrived, or an attempt to create a certain image or persona for himself. With Shaw what you see and hear is very much what you get, although he does admit sometimes he finds himself being perhaps a bit too honest with his lyrics but that it’s probably a good thing to be a little bit frightened of exposing what goes on in his head to the world, “When I mention people by name it’s a bit much. I don’t know why I do that, but I guess you just have to get over that. It almost like if something seems a scary thing to do them you should probably explore it a bit you know?”

You could be forgiven for getting the impression that Shaw is happy with his lot in terms of the level of notoriety he is getting and isn’t really that pushed by the whole idea of success. The young Englishman has released more albums then you have had hot dinners, all of which have been self recorded in his bedroom, but he hasn’t really made much of a fuss about them. They seem to have just surfaced or turned up time after time without even a whisper beforehand, with Not A Dry Eye In The House being the first exception, and when you consider the quality of the records, the whole country could be whipped into a frenzy if only they knew about the goldmine of undiscovered tunes Shaw is sitting on. That could have possibly been remedied when Shaw was approached by FIFA Records but he stepped away and said he wasn’t interested.

Despite all of that, Shaw is adamant that he sees music as a career and not a hobby, “It’s being able to do what I want and be able to make a living out of it. That’s best case scenario. It is kind of tough because it’s kind of all about keeping people enthused about you, and sometimes I feel that takes away from the artistry of it. Because it’s driven by industry you have to keep people enthused. But success definitely does motivate me to get up and keep doing it”.

Unsurprisingly, Shaw is currently knee deep in a new record before the dust has even settled on Not A Dry Eye In The House, but no release date has been set yet. Shaw feels settled in Cork and has no plans to leave in the near future, which leaves one glaring question; With three years already under his belt, how many more before we’re allowed to do a Rory Gallagher and adopt him as a Leesider?