When I was 17, I went to a reading by Sara Baume. Surrounded by women in flowery scarves asking profound questions about symbolism and imagery and who looked pointedly at me when I stumbled in late; I probably should have felt out of place. However, I had already fallen in love with Baume’s debut novel, Spill Simmer Falter Wither just as they had. It’s a novel about an older man living in rural Ireland, isolated from society with no one but his one eyed dog for companionship. It is a story driven by unfettered descriptions of nature, with an incredible lack of plot, which turns out to not necessarily be a bad thing. This time round, safe from beady eyes, I was excited to hear what my fellow Cork native had to offer in regards her new novel A Line Made by Walking. The poetry junkie in me was thrilled to hear that the new novel will follow along the same vein of descriptive imagery and the theme of loneliness, but this time featuring a narrator who is much younger. The fangirl in me was also pretty pleased to ask some burning, but alas not so profound questions.

The novel follows Frankie, a 25-year-old recently graduated art student, who struggles adjusting to life without an educational framework to support her and so goes to live in the house of her dead grandmother in rural Ireland. Baume describes the novel as a whole as loosely autobiographical, admitting that the story first had its inception as a creative non-fiction piece while she was studying her MA in Creative Writing in Trinity College Dublin. “It was essentially an essay about this period of time that I spent in the aftermath of going to art school”, she explains to me. “After that I was kind of lost and I ended up living in the house of my dead grandmother for a couple months.” It encapsulates that “well, now what?” moment most of us will experience. 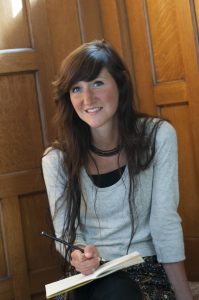 Baume goes on to tell me the tale of the quarter-life crisis, not as a widely known as its mid-life counterpart, but just as harrowing. “I think I speak for myself and my generation that we grew up with a certain expectation – you know, the Disney generation, follow your dreams and you can achieve anything. Then it turns out that that’s not true. I think this is especially so when you pursue something artistic. You think you’re going to be a superstar and it’s not until later on you realise how complicated that is. I definitely struggled to cope with that in my mid-twenties.”

The novel embraces this struggle of the in-between period of life when you have left school and university and you suddenly realise that you’re in charge of your own destiny. Baume’s protagonist embodies this struggle. “It hits her that all of the educational institutions that surrounded her all her life are gone now and she’s out on her own. She’s responsible for her own learning and her own progress through the world.”

I ask Baume about the name of the novel – A Line Made by Walking –  to which she says the title is taken from a conceptual art piece of the same name done by Richard Long in 1967. A revolutionary piece at the time, Baume explains how it still can bare so much significance to the novel today. “The artist went out to the countryside and found a beautiful field. He walked up and down and up and down and up and down it until he’d worn out a pathway through the grass and then took a picture. It was the beginning of the idea that art didn’t have to be a real thing, art could be a journey. It’s also about repetition and pointlessness and trying to go somewhere and ending up nowhere.”

Art is a major influence in the narrator’s life, as with Baume’s. Having studied Fine Art in Dun Laoghaire, Dublin, she tells me that while traditional art was always a passion of hers, she would categorize writing as simply another medium in which to work with. “Always as a kid I was drawing and writing and making. I ultimately decided on art college but I feel it could have as easily gone the other way. Writing and art have always been part of the same practice to me. The material is the variable; at the moment I’m working with words and in the past I was working with clay or with wood or with fabric.”

Baume has openly expressed the difficulty that comes with writing a novel. Despite this, at 17 listening to her elaborate on readings and press releases and literary festivals, I wanted nothing more to be sitting on her chair rather than mine. While describing her MA in Creative Writing she confesses that just because you get a degree, doesn’t mean you get that push into the seemingly glamourous world of authoring that you may need.

“It took me five years from finishing the masters to actually getting the book out. I think it was as much as living on the dole during the recession in a crappy little house in Cork harbour that flooded and had no central heating that actually wrote the novel.”

A Line Made by Walking was published by Tramp Press, an independent Irish publisher who released Baume’s first novel. Baume expresses the doubt she had about the “clichéd tricky second novel” saying how this time people are more likely to take notice of her work. However, she is open to the fact that she will be susceptible to critical reviews, considering her notoriety in literary circles due to the success of her first book. Despite this, she acknowledges the same fears she had for both novels.  “Knowing that one book would be published, I worked more intensively on the second one. I didn’t know at that stage that the first book would do well so I feel like the second one was driven by the same sort of fearful doubt and disillusion.”

Doubt and disillusion must be a distant memory for Sara Baume, with the sure success that A Line Made by Walking will glean. I’m already looking forward to hearing more profound questions about symbolism and imagery from those women in flowery scarves, who undoubtedly will fall in love once more with Baume’s work. Humble and charming, thoughtful and friendly, she remains the same softly spoken author signing copies on that cool evening during my Leaving Cert year.

A Line Made by Walking is out now.