For a band that only fully formed last January, Scoops have climbed the music ranks immensely. By ringing in the new year with a show-stopper in Dubai, it looks like things will only get bigger for Scoops in 2017. I talked to Stephen, the lead vocalist and acoustic guitarist of Scoops, to find out about the band’s genesis and what the new year holds for them.

How did the three of you first meet?

Well, I’m from Dublin, Kevin’s from Meath and Steve is from Waterford. I met Steve in San Diego on a J1. We always kept in touch and 3 or 4 years later Steve moved up to Dublin. That’s when we started playing together.

Our first ever gig was very off-the-cuff. Before Steve moved up to Dublin I was supporting Walking on Cars on a tour. This was before they blew up. After a while they wanted me to support them for a show in [Cork], and asked did I have a band or a bigger sound or anything. I contacted Steve that day and told him that if he wanted to be a percussionist it would be great. He always said that if I ever needed a drummer I could get on to him about it. That was our very first gig.

Kevin was in a cover band with Steve for years during college. Kevin was in college in Dublin doing music production and Steve moved up to do accounting initially.

The band is really only going full time since the 21st of January this year. We did our first headline gig in January. We haven’t stopped since then.

Is there one major songwriter, or does everyone collaborate?

Before the band even got together I had been writing for years. I’d usually bring the songs to the band and we’d work from there. Everybody has their own input with their songs, obviously. It’s just a matter of making the songs work to fit the sound. If I really feel strongly about a song, then the lads are usually good with it. If it isn’t that strong I’d know myself anyway, so I wouldn’t care that much. I mean you got to move on(!) It’s just a matter of trial and error. 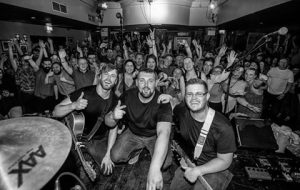 So, song-writing isn’t a problem for ye; is an album in the works?

Yes, we have one EP and we have other stuff ready to go for January. We released an EP before we ever did a gig. Before we went gigging we just rehearsed with songs. We only came back from Holland yesterday. We were doing radio stuff all over the place there. We just went into every radio station over there with our EP and chatted with all the DJs. We’re going to Berlin next week to do the same. Towards the end of February, we’re going to do a small Dutch and German tour, just to get around.

What styles of music influence your songs?

We all have very different tastes believe it or not. I’d be very open. Right now, I’m actually listening to a lot of Dutch music, a band called Kensington/Dotan. They’re huge in Holland. I love the singer-songwriter, emotional kind of stuff as well. I like Catfish and the Bottlemen; I was actually at their gig in the Olympia last Sunday. Steve is a massive country fan. Kev is more into heavier kind of stuff like Queens of the Stone Age. Despite the different tastes, we try to put all of it aside once we have the actual song there. Once everyone likes the song it’s worth it. I guess [the mix] adds to it.

How do you get connected to your audience?

In August, we started getting content up online so people can engage with us. We get music out there and put up videos. Over the last 6 weeks or so, we started doing Facebook live every Tuesday. We go live to people, play a few songs and have good craic. I find that people want to get to know more about you as a band in order to actually like you. We’re just trying to use as many handles as we can.

Was this your first major tour?

This is our second Irish tour; we did one in May as well. In January, we did our first gig upstairs in Whelans, and four months later we did downstairs Whelans. We were around England for about 7 days and around Ireland for only about 5 days. We went to Scotland in July as well. After that we were just gigging all over the place, recording, and making videos. We’re going to go to Scandinavia soon to do some gigs.

What’s the ultimate goal for Scoops?

Three years ago, for example, Walking on Cars were playing in WIT to ten people. Now they’re selling out the 3 Arena. So, 2 years from now, I’d love to be in the 3 Arena. That is the goal. Keeping that in mind you always have to keep going, keep increasing. Write good songs, real songs that people can connect to. Keep gigging and don’t stop. Try to be better than yourself.