Hannah Kingston forsakes the student lifestyle by trying to become a functioning member of society.

For many, this time of year  can be described as the  “Save the Semester” segment of  college. You have managed to scrape through semester one with minimal effort. You thought the same could be said  for semester two  but then  you  blinked  and  now  you’re  questioning  where  you  were  during January and February. Blink again and you’ll be entering the big bad world.

One of the most amusing things about growing up is that as you try to struggle on in the adult world, you become an even bigger baby. In reality, we’re all just toddlers trapped in adult bodies. We are students. We  love naps and snacks and being spooned. We have a fairly small grasp on what our futures hold or what it actually means to be a grown up. So here is one of my greatest challenges;

I believed if I could carry out these tasks over three weeks, I could most certainly identify myself as a civilized adult. But then when my alarm goes off at 7 a.m, I think to myself: “Why did I accept this challenge?” I roll out of bed  and on to the floor  and smear foundation on my face. I don’t have time for eye makeup because I need to play with the Papillion at the end of my bed and watch funny cat videos to assure myself that I’m not dying due to sleep deprivation.

Phase two, the “Blend Active.” All respected adults drink healthy juice to get themselves pumped for the day, don’t they? Beetroot, kale, berries and a banana. I am drinking sick. I make myself finish it though because if something is that taxing on my soul, it will surely make me glow. There’s lumps, it’s 7.57 a.m and I’m already late. 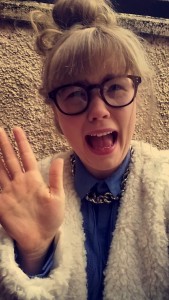 I finally get to the library. I haven’t entered this building in months because the stressful vibes are simply detrimental to my chakra. Old big baby Hannah did college work from the home office (her bed). New Hannah looks like a hag carrying a bottle of vomit and sits down at a desk to get to work. I get bored, so I try to watch Mean Girls on the tip top floor of the library. Oh yes, I no longer have Netflix. I also no longer get texts from the main men in my life, Dominoes. The realization of how grim the next few weeks begins to settle in as I read a novel set in the eighteenth century industrial Britain. (Yawn, I’m so tired, how do people work 9‐5, five days a week? Like, how?)

Step six was easy. A week before the challenge, I managed to trap nice boy who hasn’t realized that I’m emotionally unstable yet. Goodbye walk of shame, hello stride of pride. Step  seven,  on  the  other  hand,  was  another  story.  An  identity  crisis  was  imminent.  Who  am  I without my weekly bottle of dancing juice? I missed the guilt free chicken rolls it brought with it. It’s
not okay to have that much chicken and cheese when you’re as sober as a judge. I missed the taste of regret on a Wednesday and Friday morning.

Wake up, yawn, bottle of health, yawn, go into the library and destroy my zen, yawn. I am so tired. I have just realized that up until now, I have not been a functioning member of society. I never even have a pen. There is nothing more soul destroying than walking into a lecture, realizing that you don’t have a pen and sitting there uselessly like a garden gnome. So I waltz down to Tiger and I buy myself a pretty pencil case which I fill with inky pretty pens. Look at me. I am woman, hear me roar. By the end of three weeks, I’m waltzing around with my pencil case and my health and my dignity.

One Thursday night, I’m sitting at home doing my reading and I come across a quote from Seamus Heaney. “Let go, let fly, forget!” So I do, I have vodka and Dominoes for dinner, dancing for dessert and Netflix for the following day’s breakfast. I work from the home office and I only leave the house for a chicken sandwich. My dignity has gone walk about and a cloud of guilt hangs over my head. But you know what? I still have my pencil case.