Current Affairs Editor Alana Daly Mulligan looks at the political upheaval unfolding in Belarus as a result of Sunday’s election.

My mind is anywhere except in the real world, but that’s about to change rapidly.

I look at my phone and open the message.

Them: “Sorry for the pause, Armageddon is going on in my country. The government cut off the internet and mobile communications. VPN is saving us.”

I hadn’t heard from my friend in about three weeks. It was one of those easy pick-up-where-you-left-off kind of friendships.

But this was not an easy conversation.

Me: “Oh my God are you okay? What’s happening over there? Is it stopping anytime soon?”

Them: “Yes, I’m fine (I run fast). Mmm…no it won’t be over soon. This is just the beginning. Although it all depends on the unscrupulousness of the authorities. Today tanks were brought into the city, and now there are clashes in different parts of the city. The nearby metro station is one of the centers [sic] of the collisions, so I can hear the shots perfectly.”

My stomach is in my throat and no matter how hard I try to digest what I’m reading, it seems to regurgitate. I’m suddenly Googling “Belarus” and clicking on as many news articles I can find.

They offer to send me updates.

I tell them to send me everything they can.

“Everything will be fine” they assure me; “in fact, this is a kind of Belarusian tradition; we live quietly but peacefully, but when elections come, we start to be indignant”.

Belarus is a land-locked, Eastern European country wedged between Russia, Latvia, Lithuania, Poland, and Ukraine. You may have heard Belarus’ name mentioned in relation to the Chernobyl disaster, or the recent fires on Belarus’ border with Ukraine. Belarus has also been in the news as of late due to their national soccer league’s resumption amidst the global pandemic, and the very handy (albeit slightly problematic) guidebook my friend sent me for Christmas peppers the political situation with “fun facts,” such as Belarusians eat more potatoes than anywhere else in the world, and that their hot water supply is cut off for two weeks during the summer. But this is all a precursor to the former Soviet state’s current crisis in Democracy.

Here’s what you need to know about what’s happening in Belarus:

President Alexander Lukashenko has been in power since 1994. He is Europe’s longest serving leader and has been called “Europe’s last dictator” by former U.S President George W. Bush’s Administration. On 9th August, he won his sixth election by 80%, a result which was rejected by the opposition on the grounds of falsification.

The Organisation for Security and Cooperation in Europe (OSCE) did not precede over the election as they were not invited to. Further, the OSCE has said that the election process in Belarus has not been “free nor fair” since 1995.

Lukashenko’s main political opponent, Svetlana Tsikhanouskaya has fled to Lithuania for her safety.  Tsikhanouskaya appeared in broadcasts earlier in the week telling her supporters to obey the law and accept the results of the election. Belarusian journalist Franak Viačorka told DW News that the patterns from the 2010 election were repeating themselves; from the press conferences to KGB threats at the opposition, he believes that Tsikhanouskaya was pressured into walking away. Her husband, Sergei Tsikhanouski, who initially planned to contest the election, was arrested by the Belarusian authorities in May. He has been held in a pre-trial detention cell since, with his imprisonment constantly being extended.

The people of Belarus are primarily protesting with regard to the results of the election, however, the economic stagnation of the country, volatility of the Belarusian Ruble, poor social programmes and lack of governmental steps to stop the spread of COVID-19 are undoubtedly playing their role in the protests sweeping across Belarus.

Them: “We got internet back this morning, but now mobile communication is buggy (at least in the capital [Minsk], other cities are better)[…] More protests are planned […] but it is not yet known in which areas. In Minsk, they are held in 2-3 different districts. Now we are waiting. It is the end of [the] work [day] so people come home, dress up, and go for [sic] the protests.”

My friend tells me that two people have officially been reported as dead. However, unofficially, human rights activists and volunteers are working to count actualabout ten people have lost their lives in the last few days as a result of the protests. The police/special forces are cracking down on protesters and media, with a BBC report confirming this as their camera crew was attacked. But this is not new for Belarus.

Since beginning to engage in Reporters Sans Frontières’ Press Freedom Index in 2013, Belarus has consistently ranked poorly. While it has improved (out of 180 countries it has gone from 157 in 2013 to 153 in 2020), this is incremental change, meaning it’s no less dangerous to be reporting the truth. Over the last few weeks, journalists have been arrested, beaten, put in hospital, detained, and deported.

There are more twists to this story, including Russian wolves watching from the periphery, looking to exploit the political turmoil as Minsk turns on itself. Their aim: to take Belarus in the same way that Crimea was taken in 2014. In fact, the Russian military is participating in the suppression of the protests, wearing Belarusian uniforms. The Chinese government also seems to be in the mix, probably due to Lukashenko’s leniency towards their political structures as well as the potential economic opportunities that lie in the East. It’s an aspect to watch in the coming weeks and months.

Our Minister for Foreign Affairs Simon Coveney expressed his deep concern for the situation in Belarus, saying he was in support of the EU’s representatives calling on Belarus to “respect the fundamental right of peaceful assembly and immediately release all those civilians unjustly detained”.

My friend texted me back.

Them: “Today is better. Every day protesters become more than the day before and it’s great…On Sunday there were only 3,000 of us. Today, tens of thousands are protesting across Belarus. Enterprises (state and private) are on strike[…]State ventriloquists [have been] fired, officials and presidential aides are leaving their jobs[…]To be honest, on Sunday I didn’t believe that anything could be changed. I just protested because it is better to do it and [be] hit in the face with a truncheon than sit at home and then regret it.”

My friend thinks the unrest will be over before the weekend, hopeful that Belarus will finally get the chance to be the country it should’ve gotten to be following the end of the Soviet Union. Women are protesting and partaking in politics in numbers previously unseen. People in small villages all over Belarus are lining the streets to have their say. There are new colours taking to the masts of flag poles. Quite literally, there is a new country rising, and it’s being anything but quiet. My friend tells me the country needs a leader who is “free, strong and European” and with the infrastructure finally in place for Belarusians to rally together and demand their rights to democracy, it looks like they might just get what they want. But like my friend said, “this is just the beginning”. We can’t forget about Belarus out of quiet and peaceful convenience, especially now that the issue seems to be coming to some sort of resolution.

Here’s what you can do about it

The Protest in Berlin Germany where people gathered to protest the results of Lukashenko’s supposed win. 12th August 2020

Woman holding up the old Belarusian national flag in the centre of Minsk. 14th August 2020. 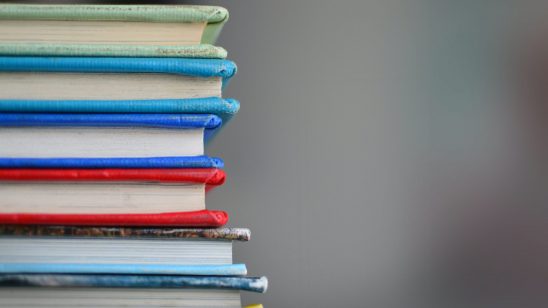 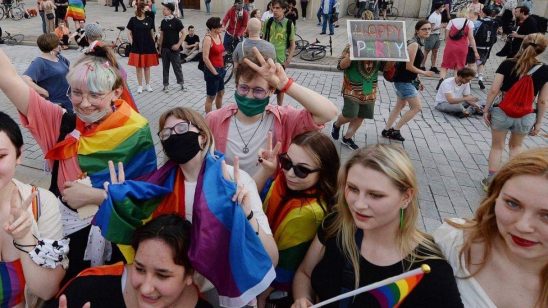 Prejudice in Poland – the LGBTQ+ Community and President Andrzej Duda.