John Hunter places a spotlight on the anti-LGBT policies of the recently re-elected President of Poland, Andrzej Duda, and how these policies are out of step with much of the Polish population.

The serge of populist, right-wing politics in countries across much of the world in the past decade has revealed itself as a serious threat to the gains made by many minority groups. One such minority, the LGBTQ+ community, having made serious progress with the widespread legalisation of same-sex marriage and adoption, has sustained many attacks by these governments and their leaders. While the bigotry has been widespread, few countries have been as vocal or insidious in their prejudice as Poland, under the leadership of President Andrzej Duda.

On 29th July, images began circulating on social media of statues in Warsaw, Poland having the rainbow flag draped over them along with pink masks, sporting the queer-anarchism symbol, placed on their heads. Following this, three activists were arrested by Polish authorities and charged with the desecration of the monuments, as well as offending religious feelings; a charge which, under Polish law, could carry up to two years imprisonment.

The severity of the charges may strike an outsider as a very extreme reaction to a rather quaint demonstration, as the act did not leave any irreversible harm to the monuments. But put into the context of Duda’s presidency and his attitudes towards the LGBTQ+ community, it makes perfect sense.

Duda was re-elected to the presidency for a second term in office on 13th July after running a campaign that stoked division and fear of diversity in Polish society. Central to his campaign was an emphasis on traditional family values, which was reinforced by Duda launching a ‘family charter’, which among other things opposed same-sex marriage and adoption of children by same-sex couples, as well as stopping LGBTQ+ issues from being taught in schools. Duda also claimed that LGBTQ+ does not represent a people but an ideology, an ideology which he believes to be more destructive than communism.

All of this divisive and prejudiced rhetoric seemed calculated and aimed at scoring points with Duda’s religious base in a tight election, with LGBTQ+ issues almost exclusively being used as a target for anything that would, in their eyes, threaten Poland’s traditional family values. And all of this was done at a time when tensions between Poland and its LGBTQ+ community were extremely prevalent and deeply problematic, with Rainbow Europe (an EU-funded advocacy group for LGBTQ+ rights) ranking Poland as the worst country for gross violations of human rights and discrimination of the LGBTQ+ community in the European Union.

This ranking is not undeserved. Along with the discriminatory statements made by its president and many in the ruling Law and Justice party (which Duda was a member of before leaving when he was elected president), over eighty local governments in 2019 declared their regions to be “LGBT-free zones”, meaning that they would not promote tolerance or contribute to NGOs who promote equal rights. The areas were criticized by the European community, with the European Parliament passing a resolution opposing the actions of the local governments, urging Polish authorities to condemn these acts and called upon the European Commission to remember “their commitment to non-discrimination” and to ensure that EU funding “must not be used for discriminatory purposes”.

Within Poland, support for anti-LGBTQ+ sentiments has not been universal. Duda’s recent presidential victory was the slimmest since the end of communism in 1989, winning only 51.2% of the vote. This shows that Duda and his rhetoric is divisive and not supported by a huge margin in Polish society. At his inauguration on 6th August, several MPs in opposition wore brightly coloured dresses and multi coloured masks in protest of the president. Outside the parliament, many demonstrators took to the streets in cities across Poland to protest the arrests of the three activists as well as the government’s anti-LGBTQ+ agendas, which led to Polish authorities detaining 48 people. International demonstrations have also taken place, with a protest taking place in Cork City on 10th August to spread awareness and to stand in solidarity with the LGBTQ+ community in Poland.

Polish society is deeply divided over these issues and its government’s actions may cause a strain in its relationship with the European Union and the outside world. While the recent demonstrations and international condemnation are positive steps forward, the country has a long way to go to repair its relationship with its LGBTQ+ community. 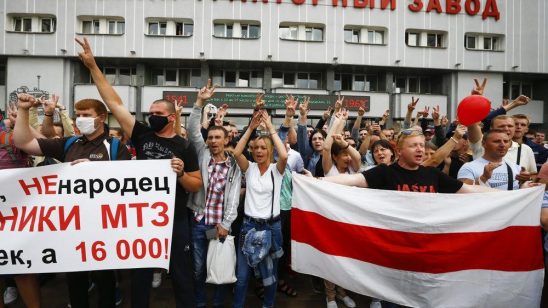 Not So Quietly and Peacefully: What’s Happening in Belarus 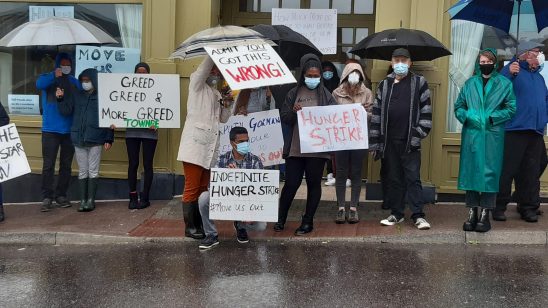