The trailer for Joy which appeared on our TV screens early in the New Year was a catalogue of confusion. It painted Joy as a film about female empowerment, while also containing thriller-like and satirical elements.

This confusion of genre surrounding Joy layered the film with a promising sense of excitement. Who wouldn’t want to watch a film where director and screenwriter, David O’ Russell worked alongside acting heavyweights, Jennifer Lawrence, Robert De Niro and Bradley Cooper?

A seemingly fool proof formula, O’ Russell’s best work in the past comprised of this team of actors, with Jennifer Lawrence winning a Best Actress Academy award for her role in 2012 Silver Linings Playbook and 2013’s American Hustle raking in box office hits. Yet, the authenticity and rawness of both these works only downgrade and expose the flaws and genre crisis innate in Joy.

Although no reference is made to the setting in the film, baggy overcoats, big hair and snowy weather conditions reveal to us that Joy is set in the late 1980s/early 90s in the backdrop of a cold Long Island, USA.

The opening of Joy is dedicated to “powerful women, one woman in particular”. Although this statement may scream “cheesy” and appear patronising to feminists, it is a promising start. The story is perhaps reminding us of unsung working mothers everywhere looking for life to give them a break. Clever flashbacks of Joy’s fragile upbringing are however marred by the annoying presence of a narrating grandmother documenting Joy’s life as if it is some sort of Cinderella story.

With such a stellar cast and all American family setting, character really could have been the trump card of Joy. Echoes of Lawrence’s gritty, rough diamond edge in Silver Lining’s Playbook appear in Joy, only vanishing and fading too soon. 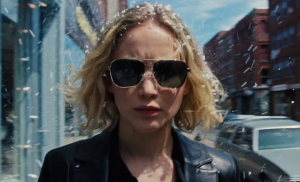 Perhaps Lawrence is confused as to what kind of woman she is meant to be playing. Drifting from a nervous, uncertain young mother to a sassy business woman hell-bent on selling her “Miracle Mop” and back again all those times in between, Lawrence’s accent is just as whimsical. At the start of the film she begins in her regular Kentucky accent, soon switching to a weak New York tone. Fans of The Hunger Games will find Lawrence’s role as a struggling mother unconvincing as they are so accustomed to her portraying the kick-ass teenager Katniss.

Bradley Cooper is achingly under-used in this film, playing a role that lacks character and power of any nature. He merely comes across as a hairy, businessman with little or no conviction. Meanwhile, Robert De Niro’s role as Joy’s mechanic father, Rudy, once more lands De Niro in a role that has become a stereotypical typecasting for the actor in the last number of years.

Foolish and floundering De Niro’s part could have been played by any of Hollywood’s greying community and perhaps even to a better degree. A shadowy romance may be on the cards for Lawrence and Cooper in the film, yet once again the audience is left disappointed as the film drags to an awkward close.

Despite its shortcomings, Lawrence’s recent Best Actress award at the Golden Globes and Oscar nomination suggest that the film contains something special. The O’ Russell/Lawrence partnership is the spark that saves this film. The intelligent storytelling and determination of Lawrence’s character prevent the film from becoming a dead-pan story about a Miracle Mop, because in fact it’s the best damn story about a mop you’ll ever see, at least in 2016.