Laura Hussey discusses the change of momentum in the Irish literary scene with Dublin based author, Rob Doyle.

Rob Doyle has just released his second book This is the Ritual, the first of his published by Bloomsbury. I let him know that This is the Ritual is placed on the shelf in Waterstones Cork next to Edna O’Brien’s latest novel The Little Red Chairs. He considers it a placement of “honour.”

This is the Ritual is a “collection of short fiction, tied together in various ways.”

When discussing the writing process of This is the Ritual in comparison with his first novel, Doyle noted that: “it’s somewhat novelistic in the ways the stories are tied together. See, my first novel took about four or five years to write, really, so it was quite arduous. I had to go back and to change it. But This is the Ritual kind of evolved more naturally or organically, in the sense that when I was writing between the drafts of my first novel, I’d take a break. I would get so tired with that novel and I would need to breathe so I would go and write short stories, kind of faux essays and pseudo autobiographical pieces. I would do this as a way to relieve the pressures of writing a novel.”

Doyle has been writing for several years, having published his first novel Here are the Young Men in 2014. The novel tells the story of a group of boys who finish their Leaving Cert in the summer of 2003. Hailed as “the Irish Trainspotting,” the novel went on to be named Book of the Year by The Irish Times.

“So after my first book came out I just kept writing short fiction for a while and then eventually I had a fairy large amount of material. I took what I thought was the best stuff but also the stuff that came together most succinctly and I put them together in a collection that felt right.”

A collection that went on to be 2016’s This is the Ritual. 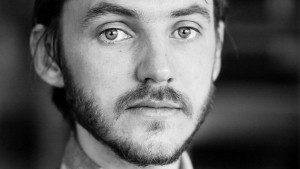 I was interested in hearing what Doyle would define as his version of a good short story: “I suppose to strip it right down to the very basics is, if it’s interesting; if the material is interesting. For me there are certain topics that I come back to, maybe you could call it an obsession, maybe I’m obsessional in the stories that I write often. Like in This is the Ritual, a lot of the themes are repetitive and so you get a lot of obsessional characters; you get sexual obsession; you get a lot of infidelity. These are just things that I find myself writing about again and again because on some level they fascinate me. As do such things as human isolation, human distress, madness or the threat of madness, or people who are adrift, people who are alone, people who are on the edge either psychologically or socially.”

It’s a particularly interesting time to have a discussion with someone like Rob Doyle. This is because the past year has been described as the beginnings of an Irish literary renaissance, as it has seen an obvious increase in relatively new Irish authors, like Doyle, appearing with fresh titles in bookshops. He weighs in on this claim, agreeing that there is noticeably a sudden momentum of change in the Irish literary scene.

“There is something going on in the sense that there really are an awful lot of people putting out their first book or their second book and there’s a lot of vibrancy and a sense of a buzz. Whereas, from what I gather, seven or eight years ago when the Celtic tiger was still a thing, there were only a handful of writers who were, apart from these established authors, who had written ten books. There were very few people trying to do something new.”

The Irish short story in particular has gained a new sense of potency with anthologies such as The Long Gaze Back having been released last year, as well as Doyle’s new book. While Doyle explains that he sees himself as a writer who is “almost primarily a book lover” his latest offering proves him as a short story craftsman of considerable skill: “Whenever I’m writing short fiction it’s almost like an act of homage for the books that I’ve read and have prompted me to write.”

As with every new turn in a culture’s literary development, that “something new” is an intriguing thing to pick at and unravel. Doyle is of the opinion that new writers are bringing ideas that people in 2016 find easier to connect with than ever before.

“Years ago, I would have felt alienated from a lot of contemporary Irish literature and I found it hard to connect with. Now, suddenly, there are a lot of writers out there at the moment doing such interesting and cool stuff and they’re making it new. Whether or not this adds up to what you would call an Irish literary renaissance, the fact is it’s creating a buzz and more people seem to be paying attention to Irish writing and international publishers are keeping an eye on it, so that can’t be a bad thing.” 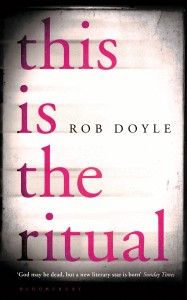 But getting books on shelves is difficult, and the world of publishing is a competitive one. Rob Doyle stands out from the crowd of new voices, and seems to have gathered popularity among university students in particular. Doyle believes it’s an intensity in his work that makes it what it is.

“I suppose I like to think that my short fiction and, in fact, most of the stuff I write has a quality of intensity, so hopefully it’s an intense experience for the reader. A lot of the stuff I love as a reader has that quality of intensity. Risk becomes more and more an aesthetic for me when I look at a writer and I read their book and I think they’ve risked a lot be that, in terms of honesty or emotion, or in terms of formal risk in terms of structure. When something is at stake that’s when I get really interested as a reader. When nothing is at stake I get a little bit bored as a reader, so hopefully my own stuff lives up to that.”

Rob Doyle’s collection of short stories, This is the Ritual, is available now.