‘Athleisure’; half Athletic, half a newfound route to take over the industry, it’s the biggest trend right now.

Perhaps this gym gear and high fashion amalgamation is a consequence of our desire to destress our everyday lives? Or maybe we’ve finally concluded that comfort trumps the rigidity of jeans or the pain of stilettos after 4 in the afternoon?

Nah, we reckon there’s more to it than just a lack of effort – not when some of the most fashionable figures in the world are pulling off this look. 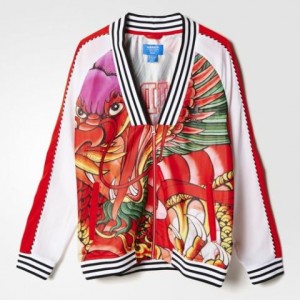 On the back of the ever-churning 70s Bohemia, don’t be surprised to find the girl who wore paisley in June to be wearing J.Crew in February. While these styles seem far apart, the truth is that athleisure is a perfect lead off from the popular hippie look because it simply demonstrates another form of fashion modernity. We may buy into the idea of high fashion, of the ulta-glamorous, but there’s something so interesting about the ‘effortless’ look, one that’s loose and easily attained (but it really took two hours) which we can’t help to return to again and again. Because of the insistence of Calvin Klein, Adidas and Puma, not to mention couture brands such as Alexander Wang and Chanel channelling some sporty sentimentality, this is a concept that won’t fizzle out any time soon.

They say great personal style comes from good intuition to put an outfit together. So, in that case it can be said that you can look amazing in clothes from any fashion area, decade or trend as long as each piece is arranged with the other in a clever way. Gigi Hadid is as good an example of someone who does this as anyone else. The young model is often seen in gym wear but, and this is her trick, she almost always pairs it with something opposingly chic. 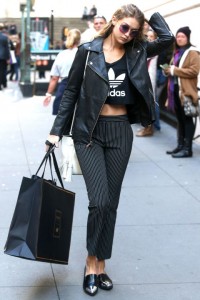 Immediately this contrast makes the outfit undeniably striking. A fan of black leggings, Gigi has styled them with an oversized A.L.C. coat, polo neck or Saint Laurent handbag. With uncomplicated cuts and shapes and a distinctively neutral palette to keep to, the model does well to promote this unexpectedly appealing aspect of designer couture.

From editors to actors, models to rock stars, athleisure is a particularly widespread, modern and unintimidating look. By the complimentary acknowledgment in designer collections, gym couture is able to distance itself from the 80s equivalent, a crucial aspect it needs to survive the long-haul. From now on, we can definitely expect to see more of this trend in high-end and High Street alike.