A ruling on Apple’s tax arrangements in Ireland was made public by The European Commission this month and it could have major implications for future foreign direct investment in the country. Apple was ordered to pay €13 billion in back taxes to Ireland, which could possibly rise to €19 billion with interest. Tax incentives provided to the eighth largest public company in the world were ruled as illegal state aid. Apple employs nearly 6,000 people across Ireland, but it is the amount of money that it has managed to save in taxes that is under the scrutiny of the rest of Europe.

In recent years, Apple, Google, Facebook, Airbnb and a whole host of other tech and pharma companies have set up their EU headquarters in Ireland for a variety of reasons. Ireland has been an EU member state for the past 37 years, we are an English speaking country and have a highly skilled workforce. We also have an excellent standard of living, historical links with the US and Europe and a large network of international air routes.

However it is our tax incentives that really attract the big players from the US and set us apart from the rest of Europe. Many will have heard of the magic number of 12.5% which refers to our corporate tax rate, a key pillar of the government’s tax strategy. In comparison, Luxembourg’s is almost 30%, the Netherlands’ is 25% and the UK’s is 20%. This gives us a decided advantage over other EU Members.

The rest of Europe, most notably France and Germany, are understandably annoyed with this low tax rate because it gives Ireland a great advantage in the competition for foreign direct investment. According to a study conducted by the Economic and Social Research Institute (ESRI), Ireland is more vulnerable to changes in the corporation tax rate than any of its European partners when it comes to securing investment from the United States.

Another well-known tax incentive over the years was the Double Irish Dutch Sandwich Arrangement. It was incredibly complicated, but in simple terms relied on the fact that Ireland taxes companies only if they are controlled and managed in the country, while the US’ definition is based on where a company is incorporated. It was called the Double Irish because a company could put their intellectual property into an Irish-registered company based in a tax haven, such as Bermuda or the Cayman Islands, while a second Irish registered company in Ireland would collect on profits.

Transferring these profits from the Irish based company to the Irish company in the tax haven involved a Dutch conduit company, hence the Dutch Sandwich part of the name. So the profits from the first are sent off as royalties for the use of intellectual property into the second, and that company is not Irish taxa 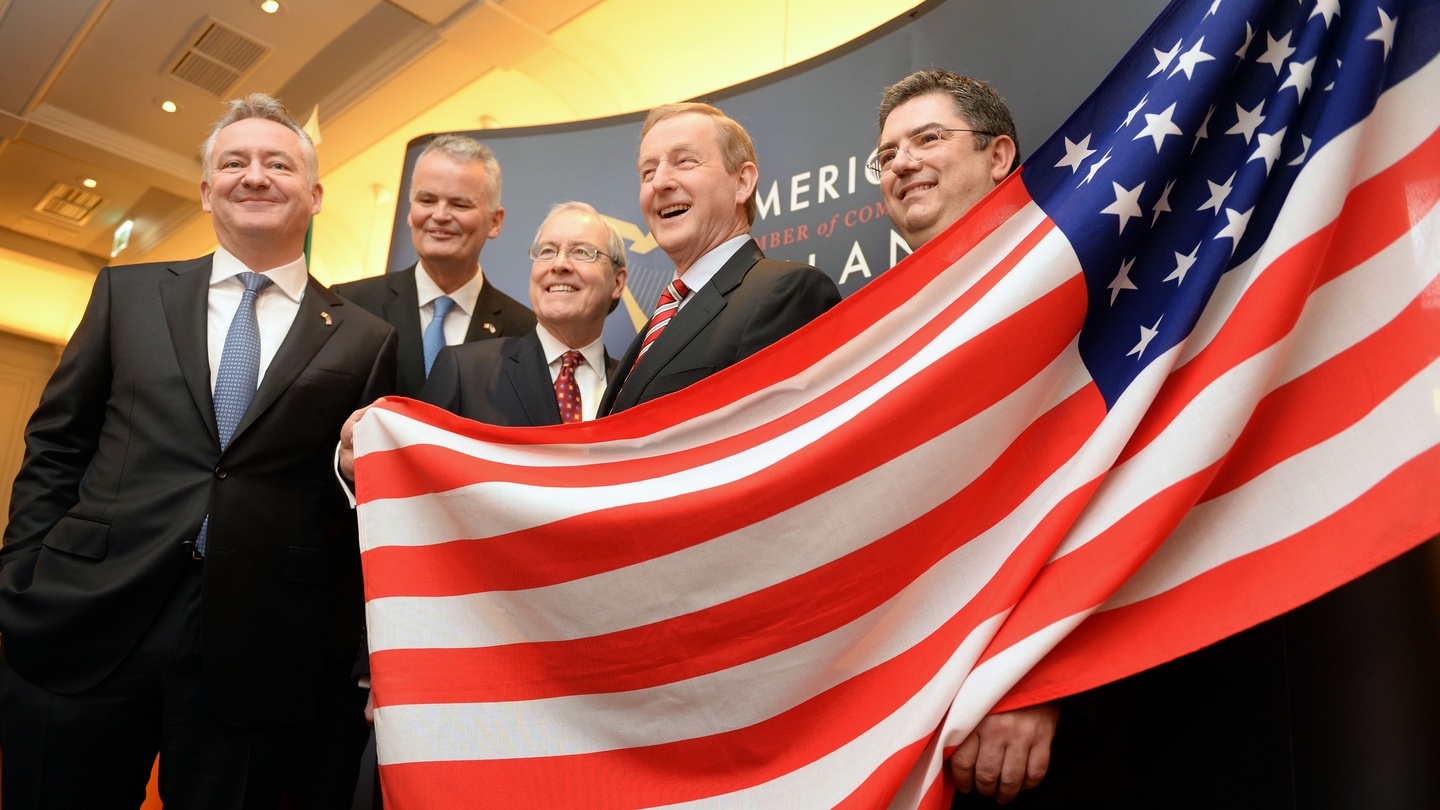 This would effectively mean that a US company could make a profit of $10 million, but would only have to pay the
Irish corporate tax rate on about 20% of this, meaning only rough loses of $250,000. When you translate that to billions, huge amounts of money are saved and it is well worth all the hassle. It is estimated that companies saved $1 trillion using the Double Irish arrangement and many experts agree that in 2014 Apple paid an effective tax rate of just 0.005%.

Ireland was labelled as a “tax haven” on the floor of the US Senate in 2013. Barack Obama said the same in 2012 when attacking the personal investments of his presidential election opponent Mitt Romney. He also hit out at corporate “inversions”, which US pharmaceuticals regularly use to set up tax avoiding paper-based mergers in Ireland, as “one of the most insidious loopholes out there.”

Under pressure from the EU and the US, Michael Noonan brought in measures to end the Double Irish in 2014. It has been closed to new entrants since January 2015 and will be phased out for existing users by 2020. However, in a preliminary ruling in 2014, the Commission argued that Apple had received letters of comfort with the Revenue Commissioners in 1991 and 2007. “Member states cannot give tax benefits to selected companies – this is illegal under EU state aid rules,” said the European competition commissioner, Margrethe Vestager (pictured on the following page).

Apple has two companies set up in Ireland, Apple Operations Europe (AOE) and Apple Operations International (AOI). Irish company law considers these two entities as completely separate. All European sales are attributed to AOI and then all profits are taxed at AOE, which has registered shareholders in tax havens such as the Virgin Islands (shown in the graphic above). The Commission said the US company was allowed to attribute sales to a “head office” that only existed on paper and could not have generated such profits. The Commission has now accused the Irish government of facilitating this arrangement.

This company also serves as a group finance company. Apple Inc., the U.S. parent of the whole group, pays U.S. tax on the investment earnings of this company. Otherwise, the holding company pays no tax to any government. It pays tax nowhere. This method of tax evasion is open to everyone, but Apple was accused of getting special treatment regarding the transfer pricing rules by the Irish government.

This would have given the company an unfair tax advantage, but the Government and Apple have consistently denied any breach of State Aid rules. The EU has strict competition laws where one company cannot be given

favourable treatment that enables them to bully the rest of the market. This isn’t an issue of whether Ireland’s tax regime is fair or unfair (it has been consistently proven that the EU cannot meddle in tax affairs of countries), but whether Apple were given favourable treatment.

Ireland has decided to appeal this ruling. It’s an odd one, because the Irish Government has paid almost €300,000 in legal fees to stop the EU Commission ordering Apple to pay the Irish Government billions. This shows the importance of the continued business that companies such as Apple have provided to Ireland and will (hopefully) continue to provide to Ireland. In a letter to customers, Apple chief executive Tim Cook said that “The most profound and harmful effect of this ruling will be on investment and job creation in Europe.”

That outcome wouldn’t be good for Ireland and the ruling could have an even larger effect on the country’s economy than Brexit. The problem is uncertainty. Sure, this ruling might be overturned, but are US companies going to wait four or five years to see if they can invest or will they settle on a safer option like The Netherlands or Luxembourg?

Of course the other option for Ireland was not to appeal at all and instead take the money. The €13 billion on offer is roughly the same as our health budget and only covers the years 2003-2014 because the Commission are not legally allowed track back any further. The Commission has also stated that while it recommends Ireland use the money for its national debt, it is not obligated to do so and the money would in theory go into the government’s budget. Ireland’s level of debt does stand at around €204 billion however, which is why the EU would be keen to see us spend the windfall cash on reduction. The €13 billion on offer is certainly an attractive proposition for Ireland, no matter what the government would have decided to spend it on.

It is reported that Apple has a cash mountain of close to $240 billion, so it would not struggle to pay its tax fine. However, even if Ireland hadn’t appealed, Apple most certainly would have for fear of further backlash against US companies in Europe. This means a 4 or 5 year process and two appeals through the European Court of Justice and Apple has the power and funds to drag it out for as long as possible. It has been argued that this isn’t about Ireland and is just a big f*** you to the US from Europe, so Apple will be keen to battle this one out.

Finance Minister Michael Noonan condemned the Commission’s ruling and said taking the money would be like “eating the seed potatoes.” However The Independent Alliance and Shane Ross were keen to throw a spanner in the works. Sinn Féin has also said that Ireland should take the money, but this seems contradictory to their usual stance against the EU, so you would be forgiven if you thought their statement was fishy.

There are tangible benefits to multinationals in Ireland. Apple employs 6,000 people in Cork, who you could argue pay quite a large amount in tax through wages. These people won’t lose their jobs, Apple has no intention of pulling out of Ireland, but other Tech companies may be dissuaded from setting up here. The Information and Communications Technology sector accounts for more than 37,000 jobs and exports €35 billion per annum.

If you look further afield at other large companies who avail of our tax regimes, you can understand why Minister Noonan is so keen to avoid taking the Apple money. According to the Industrial Development Agency (IDA) the pharmaceutical industry (‘culprits’ of the tax arrangement mentioned by Obama above), provides more than 25,000 jobs and exports €39 billion worth of goods. These industries are growing exponentially and this is because of the low tax arrangements in place in Ireland.

Do we risk losing these jobs too? What about the solicitors, accountants and engineers? There is obvious benefits to kissing the asses of corporations worldwide. We have to face facts and realise that we are small players in the world of business. We are never going to get the whole pie, but there are very few others picking up the crumbs.