What is the Electoral College?

When you cast your ballot in the United States election, you’re not voting for Donald Trump or Joe Biden directly. You’re voting for a state elector, who will then vote for a candidate on your state’s behalf. If you’re confused as to how the electors themselves are chosen, don’t worry – so am I. But if you pop over to USA.Gov/Election, it gives a pretty comprehensive, albeit still slightly puzzling, explanation:

There are 538 electors in total and the number of electors in each state is equal to the number of representatives they have in the House of Representatives and the Senate (the number of representatives for each state in Congress is proportional to population). California is a large state, so they have the highest number of electors, which is 55, meanwhile rural states such as Alaska or Wyoming only have 3. One elector is equal to one electoral vote, and whichever candidate reaches 270 or more votes first wins the election. For reference, here’s a map of the United States in 2016, which shows how many electoral votes each state had and how they voted (red for Republican, blue for Democrat). 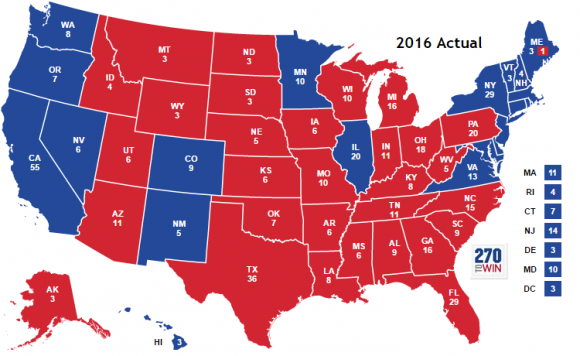 The freaky part is that- well, let’s say that Massachusetts votes Democrat, thus securing eleven Democrat electors. None of those eleven electors are obligated to vote for Joe Biden in the end. They can go rouge, vote for Donald Trump, or Bernie Sanders (who isn’t even on the ballot), or any other third-party candidate. This is rare, and hardly ever tips the election, but it did happen in 2016. Hillary Clinton lost five of her pledged electors and Donald Trump lost two – they voted for John Kasich, Bernie Sanders, Ron Paul, Faith Spotted Eagle, and Colin Powell. This isn’t really important because, as I said, the defections never actually impact the result of the election. I just wanted to include this bit to give you an idea of how unstable and weird this process is.

Why Does the Electoral College Exist?

The Electoral College was a compromise. Nobody actually wanted it, and you can probably see why. The Founding Fathers, in 1787 at the Constitutional Convention, could not mutually agree upon an electoral process. Some of them believed that it would be the most democratic for citizens to vote for their president directly, while others thought that the responsibility should be that of Congress and not the uneducated masses. There was also the question of whether or not such a majoritarian system would neglect and alienate the minority of voters, and this was primarily an issue raised by states in which slavery was still a driving force of the local economy. African-American slaves made up a substantial portion of the southern population but could not vote because they weren’t considered citizens, so when the government decided to implement the electoral college, they decided that slaves could be counted towards a state’s population for the purpose of fairly allocating electoral votes.

But that’s not an issue anymore, so surely the electoral college is defunct now, right? Surely it’s outdated, and we should just get rid of it? Well, people today are still using a similar argument. Here’s another handy visual for context. 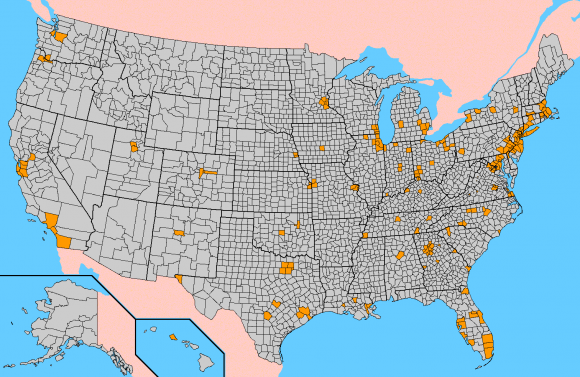 The areas of this map that are shaded yellow represent half of the total population of the United States of America. The population of America in 2020 is estimated to be 331, 002, 651 people. This means that (approximately), 165, 501, 325 live in the yellow areas, and 165, 501, 325 live in the gray areas. States such as Nevada, Arizona, Wyoming, Montana, Idaho, North Dakota, South Dakota, and Alaska don’t have any counties that are shaded in yellow because their populations are so small compared to the other states. If you’re running for executive office in the United States, then you might as well not even bother campaigning in these states because it’s a waste of time, money, and resources. Why campaign in Wyoming, the state with the lowest population and therefore the least amount of potential voters, when you could instead be campaigning in California, or New York, or Texas, or Florida, where there are more potential votes to be won?

The main argument in support of the Electoral College is based upon this concept; the concept of balance and fairness. The Electoral College, in theory, is an equalizer. Candidates must campaign in rural states, and prove their dedication to rural values and interests, or else they can never win the election. And sure, that’s fair, that’s a nice concept- but does it work? Your goal is to balance the playing field, make it so rural votes carry as much weight as urban votes, so your solution is to… make it so urban votes carry less weight instead? Well, aren’t we back where we started then? Except we’ve only flipped the inequality? I agree that rural voters deserve an equal say in how their country is governed, but what inherent value do rural votes possess that urban votes don’t, besides the fact that rural votes are almost always for the Republican Party? Why do people care about rural states being overshadowed by urban states, but not the other way around? Why are we treating states and people as competing interests when states are people? States are just groups of people, they aren’t their own separate entity. I’m confused and I’m angry and I have a tension headache.

Long story short: the Electoral College isn’t really as “democratic” as people claim. People will support anything if it helps them achieve their desired end-goal, whether that’s a Trump victory or a Biden victory. But let’s face it – the Electoral College almost always favors Republicans. In 2000, the Democratic Party candidate, Al Gore, lost to George W. Bush despite having won over half a million more votes than he did. Gore lost the presidency because he couldn’t secure the state of Florida, while Clinton lost because she couldn’t secure Pennsylvania, Michigan, or Wisconsin.

I’m from Massachusetts, a very densely populated northeastern state with eleven electoral college points. We’re a historically Democratic state – in fact, in 2018 we were considered the most Democratic state, with 56% of our population being registered to the Democratic Party. It’s virtually guaranteed (knock on wood) that Massachusetts will vote for Joe Biden in the 2020 Presidential Election. But in the end, it doesn’t matter how many of us vote. It doesn’t matter if 100 of us vote or if 1,000,000 of us vote. We’ll receive the same number of electoral college votes regardless, and ultimately, the election will be decided by the swing states. I know we aren’t supposed to say “My vote doesn’t matter,” but as a person from Massachusetts, my vote, quite literally, does not matter. How’s that for equality and balance?

What Actually Are Swing States?

Unlike Massachusetts, not all states consistently vote for the same party every year. These states are Wisconsin, Arizona, Georgia, Florida, Iowa, Minnesota, Michigan, Nevada, New Hampshire, North Carolina, Ohio, and Pennsylvania. Even Texas, a historically red state, might flip blue this year. They’re called swing states because they’re capable of swinging the result of the entire election. Trump won every swing state in 2016, and although Biden is leading in the polls now, we know better to put our blind faith in websites like FiveThirtyEight.com, which famously predicted that Hillary would have a ninety-percent chance of winning the 2016 election. On election night, these will be the states to keep an eye on. Florida is the biggest one, with 29 points up for grabs and an extremely inconsistent voting history. Florida was hit hard by COVID-19 (I often refer to them as “The Italy of America”) so we’ll have to see how that impacts their perception of Trump. Pennsylvania, Biden’s home state, has 20 electoral votes and is also highly contested. Ohio has 18 points, and since 1964, whichever candidate wins Ohio always goes on to win the Electoral College. Trump won by a large margin in 2016.

If you’d like to see a breakdown of every swing state, Independent.ie has a great explainer article.

So Will We Get the Results on Election Night?

Maybe. We’ll have to wait and see. The Irish Times has a great article on this, but essentially it all depends on how many votes they manage to receive and count on the night, and which states they’re from. For example, if the race in Florida is close or looks like it could go to Biden, then the election is over. Biden wins. But if it goes to Trump, or if the polls are too close to call, then we’ll have to wait and see how things play out in the other states before we can begin celebrating or inconsolably weeping, or what have you. Florida, however, begins processing mail-in votes received prior to election day before polls close. So we might end up getting a really early result. The Irish Times article explains it in more detail, diving into identifying which states are the most important and what time their polls close.