GTFO: Get Stuck Into Your Year Abroad by Getting the F*ck Out

Siri tells me loneliness is a sadness due to lack of company, or being isolated, and while my semester abroad was academically engaging, it was a lonely one, something that seems to be a common thread on the UCC Confessions Twitter. UMaine is in the middle of nowhere and the independence of college living that UCC offers does not exist. I missed little things; going to Tescos, having a quiet one in New Bar, I even longed for Q+3. It was through this mindset that I developed a policy of G-T-F-O.

Get off campus and get out of your comfort zone– Fortunately, I made friends with two of my flatmates, and soon found myself motoring down the highway singing Hamilton for a Fall Break road-trip exploring Cape Cod. I saw magical New England seasons in their full amber and gold glory, we chased the biggest turkeys you’ve ever seen, went to art galleries, tried different kinds of American candy, and fell in love with Provincetown. Despite being out, the gay capital of the East Coast was the last place I thought I’d enjoy. But wandering through colourful sunshine-soaked streets, feeling affirmed seeing rainbow flags in shop windows, for the first time in my life, I understood the meaning of ‘out and proud’, even if that meant confronting my own insecurities. Take a break– Studying abroad is HARD and don’t let anyone tell you otherwise. It might be your first time living in another place, or first time out of Ireland. A great way to start the settling process is through on-campus groups. The International Students’ Association took us foreigners to Fort Knox in Maine, where my joke “it’s like Fort Knox” was greeted with groans. After bonding with some of the other International students, we took an impromptu trip to Boston for Thanksgiving. The streets were beautiful ‘brown-brick’ mazes of revolution, literary wonder, and as we toured around, we celebrated our little found family that we luckily stumbled across. Just taking the time to unwind and see something you otherwise wouldn’t have is always special. Find your tribe– You will feel homesick and want nothing more than to stumble into Boole with a hot chicken roll from Daybreak to suffer through hangovers with friends. Grass is always greener ( legit, Irish grass is so much greener), but you are bound to find a few good eggs who love you as much as those in UCC. On a trip to Bar Harbour, I bonded with classmates over a picnic arranged by our adorable professor. It was great to meet like-minded nerds, who became crucial supports. I also became good friends with a cohort of students from Ireland and all over the UK. Through our shared experiences of missing our cultures, we learned despite the colonisation and Potato Famine jokes, we were far more similar than we could’ve imagined. Open your arms to new opportunities- When you travel, you learn a cultural language which completely affects how you interact with the world. I’m used to travelling alone and decided to take a 12-hour bus down the Northeast to get to New York and Pennsylvania, visiting some older friends. I had tears of joy getting out of the yellow taxi seeing a familiar face, having a glass of wine, and watching not-so-far lights of Manhattan glimmer off the water as I fell asleep in Brooklyn – it was perfect. I visited another friend studying in Muhlenberg College, getting to hang out with her and her friends, travel around to her classes and compare my experiences learning in UCC to that in UMaine to that in ‘Berg.

If we stop, we can’t move forward in ourselves. No matter how hard it was, I am so glad that during my time abroad that I tried to push on and make the most of the experiences I was given. By getting out of Ireland, I learned how much I missed home, and by getting out of Maine, I realised how much I wanted to get out of the unhappiness I felt- but that’s a scéal for the next time. Bottom line: Live a little, and get the fuck out. 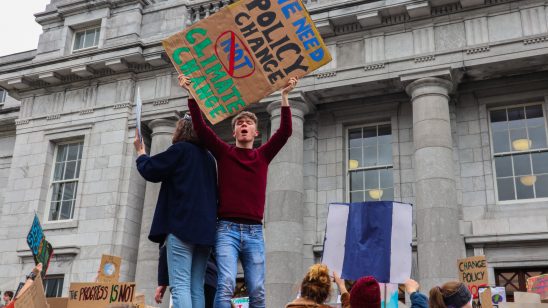 We need to talk about Ireland’s attitudes to young people.