On Wednesday 13th January 2016 at 6 pm, at the Mansion House, the Union of Students in Ireland will launch ‘SmartVote’, a new website app labelled ‘The Tinder of Politics’, matching the public with political candidates that best share their views. SmartVote works by asking all political candidates their opinion on 30 topical issues. The user gives their opinion on the same issues. SmartVote then matches each user with the candidates who best represent their views. Similar voting assistance tools are already successful around Europe – Stemwijzer in Holland is used by 80% of 18-25 year olds, come election time.

“The Union of Students in Ireland is extremely excited to be working with SmartVote,” Kevin Donoghue, USI President said, “It will revolutionise the General Election and the voting process. It’s quick, simple, easy-to-use and will educate the public on who their political candidates are, what they stand for and why they’re worthy of their vote. Lines can be blurred leading up to the General Election about where different political candidates stand on important issues. This app cuts through any confusion and gets straight to the point.”

The app began life being used in the UCD Student Union elections in March of this year. Over 2000 students used the app, with 83 per cent of those who gave feedback on it saying they’d use it again for the General Election. 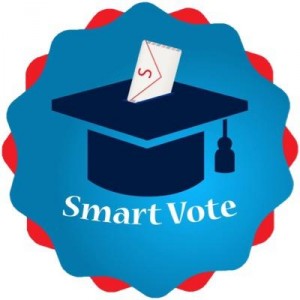 SmartVote was born in UCD’s Innovation Academy. Founder Keith Moore explains, “I had a problem in the local Elections. There was no one place where I could go, to easily compare the 23 candidates in my constituency. For the first time in my life I didn’t vote. I thought to myself: ‘There has to be a better way to make an informed voting decision than posters and flyers’.”

“In the past two years USI have registered over 80,000 new student voters.” Donoghue said, “SmartVote is a free and efficient way for us to empower both the public and political candidates through a national platform modernising voting and allowing fast, accurate and direct messaging on the key issues that will sway votes.”

SmartVote has already had two pilots – the first during UCD’s Student Union Election and the second in the recent Carlow-Kilkenny by-election. Users will be more engaged and have more confidence to make an informed vote and decision. Malcolm Noonan of the Green Party has said “SmartVote is the future of political campaigning!”

Co-founder Gordon Rose explains why SmartVote works so well: “Users get up to speed on the issues and candidates in just 5-10 minutes, about the same time it takes to read one manifesto.”

The changing of Electoral boundaries for the upcoming election didn’t stop the SmartVote team from achieving their goal. They went to every county council and got the list of addresses for the new constituencies. Users just need to type in their street or town and SmartVote will tell them their constituency and their candidates.